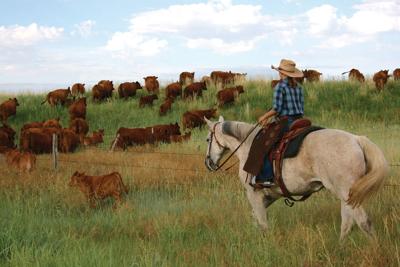 Red Angus commercial heifers are the hottest commodity on the market. It not unusual for them to outsell steers. This is no fluke as breeders have kept as their highest priority decades of selection for maternal cattle.

The current popularity of Red Angus females is the culmination of decisions made by the Red Angus Association of America and its members starting with its formation 65 years ago. From the beginning, the association was based on objective selection with performance records as a requirement for registration.

Another fundamental founding policy was the belief in planned crossbreeding. In the mid-1990s, the association fine-tuned the breed’s position in the industry and crossbreeding programs as “the maternal common denominator in progressive commercial producers crossbreeding systems.” Red Angus breeders have been striving to fulfill this goal ever since.

During this time many breeds have focused on terminal traits, but Red Angus has kept its primary target on maternal traits—especially fertility. This started with the association switching to mandatory Total Herd Reporting in 1995, which requires the production of every cow and the performance of every calf be accounted for each year. It is only through this type of inventory-based recordkeeping system that the unbiased objective description of fertility can be accomplished.

Lastly, Stayability is the probability difference that once a female enters the herd that she remains in the herd to a profitable age of 6 years old. Although primarily a reproductive EPD, Stayability is also influenced by cows leaving the herd for other reasons such as soundness.

The next maternally-oriented trait Red Angus pioneered was the mature cow maintenance EPD released in 2004. The components of this genetic prediction are mature weight, body condition score, and genetic milk potential. Milk is part of the prediction because higher milk cattle have a higher proportion of their body weight in high maintenance gut and organ mass.

The priority given by Red Angus breeders to maintenance energy has helped balance the selection of revenue traits like growth and milk with the cost of increased maintenance. Many in the industry believe this has helped keep the breed in tune with the average environment commercial cow-calf producers manage their cattle.

Another major breakthrough occurred in 2010 when the Red Angus Association and the American Simmental Association formed the company that would become International Genetic Solutions (IGS). The express purpose of this new venture was to produce across-breed EPDs on the same base and scale to aid commercial producers in designing crossbreeding systems.

The breeds that now partner in the IGS analysis are Red Angus, Simmental, Shorthorn, Gelbvieh, Limousin, Maine-Anjou, and Chianina. This means all these breeds’ genetic predictions are presented using a common language, so their EPDs can be compared on an “apples-to-apples” basis when designing a crossbreeding system (see Western Livestock Journal’s 2019 North American Bull Guide, “Comparing Cattle for Crossbreeding,” page 63).

For objective evaluation of commercial heifers, the Red Angus Association introduced the Red Navigator commercial heifer genomic test in 2015. For $22, the test gives objective genetic descriptions for 16 traits. This allows commercial producers to fine-tune the genetics in their replacement heifers with their ranch’s environment, management and marketing program. Many producers are using these tests to make their final cut on which heifers to keep as replacements after removing obvious culls.

A recent program unveiled by the Red Angus Association and American Hereford Association is the Premium Red Baldy marketing program. To be eligible, heifers must be 25 to 75 percent of each breed and out of sires in the top 50 percent for Red Angus’ Herdbuilder index and Hereford’s Baldy Maternal index.

As this timeline of innovation demonstrates, the demand for Red Angus commercial females is well-founded. It starts with the foundation of the association being based on objective selection. Moreover, the breed has focused on Angus strengths, which includes maternal traits.

The association has also broken new ground for selection of reproductive traits, which has been a priority by the breeders for decades. Also, emphasis on traits like maintenance energy has help keep the breed’s genetic potential so that it works in the majority of commercial producers’ environments for traits like milk. This all adds up to a well-deserved demand for commercial Red Angus heifers. — Dr. Bob Hough, WLJ correspondent

You can't manage what you don't measure, but if you use the wrong measurements, your management will go nowhere. When it comes to EPDs, knowing the basis is one of the basics for success.