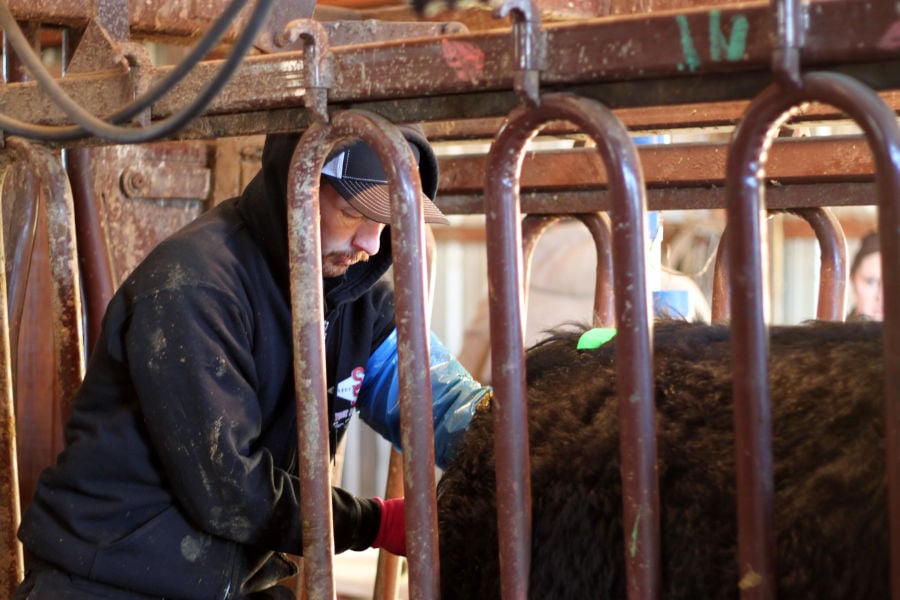 An AI technician inseminates a cow.

Many cows today are bred via artificial insemination (AI) with semen collected from a good bull. Most dairy cows are bred AI, many seedstock beef herds use AI, and a growing number of commercial beef herds utilize AI on their heifers and some of their best cows. This is a way to extend the benefits of a good bull, or make sure heifers are bred to easy-calving bulls, or utilize genetics of multiple outstanding sires without having to own them.

The process and technology—and conception rates—for AI have improved tremendously in the past 50 years, but the procedure is not new. The earliest actual documented use of artificial insemination was in 1780 when an Italian physiologist named Spallanzani produced puppies with AI in dogs.

A few more reports of successful AI breedings appeared during the 1800s, but it wasn’t until about 1900 that extensive studies with farm animals began in Russia. A scientist named Ivanov developed the technique for mares, and by 1930 he and his associates were doing artificial insemination of cattle and sheep.

By 1938, AI was being done in U.S. dairy herds and a few beef herds using extended and cooled liquid semen, packaged in glass ampoules (vials). Most AI studs were local, because fresh semen couldn’t be transported very far.

Carl Rugg, owner of Bovine Elite, LLC, says that when he first became interested in AI, the process was performed by veterinarians who serviced the cattle herds in their area, and later by specialized AI technicians who were employees of AI cooperatives.

“The semen distributor would bring semen from three or four bulls to the veterinarian, and in those early years it was mainly dairy bulls. The semen was extended with a media to prolong the life of the semen sample, placed in sealed glass ampules and kept cold in an ice bath. The extended semen was drawn up into a plastic pipette to breed the cow. That fresh cooled semen would last two to five days, depending on the quality of the semen and the fertility of the bull,” he says.

“When I was a boy in western New York, my father had Holsteins, and started using AI on his cows in the late 1950s,” said Rugg, calling it fascinating.

“The veterinarian or technician came in his truck and discussed with Dad the merits of the bulls he had available that day. Dad would select a bull, the technician would retrieve the ampule of semen from the ice water bath and breed the cow.”

Rugg said his father never had a bull on the place but the conception rates were high with the cooled, fresh semen.

“In those early days with fresh semen, pregnancy rate was well above 70 percent in our herd. Dad always had our cows in proper condition for the best reproductive efficiency. The biggest issue was catching the cow in heat at the right time. Dad would observe the cows morning and evening for signs of estrus and put a chalk mark on the one to be bred. Even if we weren’t there when the technician came, the cow would be in the stall and he’d know which one to breed.”

A lot of progress has been made in reproductive and semen technology since then. The advent of frozen semen revolutionized the AI industry.

Beef AI began in the early 1950s with performance testing of certain bulls. Some progeny testing was done in the late 1960s and early 1970s by the Beef Improvement Federation. The American Simmental Association had the first sire evaluation in the early 1970s. Importations of some European breeds were only possible using frozen semen and AI, due to restrictions on importing live animals.

“This was about the time we moved to the next phase of AI in cattle, packaging and freezing semen in French straws,” explained Rugg, who received his master’s degree in reproductive physiology from Colorado State University.

“We continue to use this technique and packaging method, which allows semen to freeze and thaw with higher recovery and ultimately a better conception rate with frozen semen. This was an improvement over the process of freezing and storing semen in glass ampules.”

Conception rates with frozen semen have improved even more in recent decades. Being able to ultrasound the cow’s ovaries and determine time of ovulation helped researchers figure out the best time to inseminate cattle, resulting in better conception rates.

Today the AI process is also easier, particularly with the use of synchronization protocols. All cows in the herd can be bred the same day instead of having to watch for signs of heat during the breeding season.

Willie Altenburg, a cattleman in Colorado who runs registered Simmental and Angus and has worked for several semen companies (now with Select Sires), says heat synchronization and AI has worked very well for heifers. “Heat synchronization is being done more and more in large herds, and has become commonplace for heifers as a management tool for many producers,” he says. It allows them to breed and calve their heifers ahead of the main cow herd.

“We’ve struggled a bit more with cow AI, however. Advent of the CIDR (controlled internal drug release device) and use of prostaglandin has really helped with that, so today the beef industry is doing more cow AI. Synchronization and fixed-time insemination has helped when working with cows, but we need an army of arms to get this accomplished. Most producers can’t breed 100 or more cows in one morning, and it can also be a challenge with some ranch facilities,” he says.

“AI organizations now have portable breeding barns and technicians who can come do chute-side service for the whole operation—and get those cows all bred in a few hours,” says Altenburg. — Heather Smith Thomas, WLJ correspondent

Reproductive success depends on a good nutritional plane and a lack of deficiencies. Since AI still sees lower pregnancy rates than natural service, nutrition is all the more important.