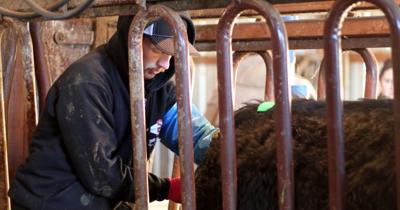 There’s a lot going on on your ranch and sometimes it’s just easier doing things the way you’ve always done them. It might be easier, but is it the most economic choice?

According to presenters at the 2019 Range Beef Cow Symposium, held Nov. 18-20 in Mitchell, NE, the cost of sticking to the old standby of natural service might be higher than producers think, in both actual dollars lost and potential gains left on the table.

Dr. Ken Olson, beef specialist for the South Dakota State University (SDSU) Extension, kicked off the symposium’s Tuesday talks by pointing out how often some topics—like the value of reproduction technology—have come up over the course of 26 Range Beef Cow Symposia, yet how low adoption rates are.

Though there is more to reproduction technology than just artificial insemination (AI), AI is often used as a bell weather for other reproductive technologies. Adoption rates of AI in the beef industry are especially low. According to older 2009 National Animal Health Monitoring System data (most recent, 2019 report due out soon), less than 10 percent of the beef industry uses AI.

Olson sympathized with why producers might not have adopted reproduction technology.

“Quite often, it's just easier to keep doing what you’ve been doing,” Olson acknowledged. But he and a couple other presenters characterized the status quo as potentially costly when it comes to reproductive technology. Though opportunity costs are hard to quantify, several presenters tried in three key areas that control the bottom line of the cow-calf operator: Calf weaning weight; cow cost and longevity; and bull costs.

“We all know, through reproductive technology, that we can change the calving distribution to having older calves. Why do we care?” asked Dr. Julie Walker, another beef specialist with the SDSU Extension.

“It’s money in your pocket.”

It’s a huge investment in time

“It’s a huge investment in time to have a long calving season.”

She spoke of the value of fixed-time AI or estrus synchronization used with natural service to shift a ranch’s calving distribution to a tighter, earlier window. Speaking of an effort implemented on a 300-head cow herd from the University of Florida from 2008-2013, she explained how the herd went from having a 120-day calving window to having a 70-day calving window through the use of timed AI.

“I can say 50 days is a lot less time and labor for you to go check cows. It’s a huge investment in time to have a long calving season,” she told the audience.

“The mean calving date was dropped by about 40 days, which is huge in my mind because a calf grows every day.”

Roughly 2.4 pounds per day, according to the Meat Animal Research Center’s data, Walker noted. So a calf conceived in a cow’s first cycle and born in the first 21 days of the calving window will be on average 50 pounds heavier at weaning than a second-cycle calf. Depending on how you market your calves and market dynamics, that can mean $50-75 dollars more per calf.

Since a cow has to deliver several calves before she has repaid the rancher the cost of developing her, keeping cows in the herd is economically necessary.

“The earlier those heifers calve in the first calving season means they’re going to stay in the herd longer,” said Dr. John Hall, beef specialist and superintendent of the University of Idaho’s Extension.

“That’s a big piece of value for the commercial operation. The fewer cows that we have to turn over, the more cows that we can keep in the herd, then the greater value we are going to get back from that herd.”

Older cows also tend to wean bigger calves since they, unlike heifers and younger cows, no longer need to dedicate resources to their own growth. Again, bigger calves mean more pounds to sell. But the process of making older cows that wean older, bigger calves starts with the heifer.

Walker made the point that if a reproduction technology is going to be tried, using it on heifers to give them a better chance to conceive in their first cycle can offer a good return on a one-time investment with dividends paid by way of a longer life of early calving.

Bulls are the other part of the reproductive equation, and Hall had a lot to say about them. Citing research done by Dr. Alison Van Eenennaam of University of California-Davis, Hall noted that even bulls that have passed their breeding soundness exams might not be breeding as many cows as we think they do.

“On average in her study, they were producing 18.9 calves when they were turned out on a 1 to 25 ratio,” he summarized. “It varied from 0 to 64 and there was about 4.4 percent of the bulls that weren’t producing any offspring at all.”

“My AI tank never broke its penis halfway through the breeding season.”

He also noted that bulls are expensive, even when they are working as well as producers tend to assume.

“If we look at the $5,000 bull—which seems to be the average—and we give him a 90 percent preg rate … that comes up with about a $90-91 cost per pregnancy for that bull for that year,” Hall summarized, based on a three-year bull lifespan at a 1:25 ratio. That price did not take bull carrying cost into account. As the cost of the bull goes up or his success rate of getting cows bred goes down, the cost per pregnancy necessarily goes up.

He compared that natural service cost per pregnancy to that of AI cost per pregnancy, estimating approximately $14,300 for the added equipment, synch technology, additional labor, semen, etc. for a 300-cow herd.

“If we look at that and say we have a 50 percent preg rate, then we end up with about 150 calves out of that and that calf is going to cost us about $95 to have that AI calf. If we get around the 55 percent level, which is what we see more normally, then that AI calf is cheaper than that natural service calf from before.”

Hall also indirectly pointed out that there is a hassle in having bulls around that is not the case with AI.

“So, there are some things we have to deal with with bulls.” — Kerry Halladay, WLJ editor

What to expect when calving timed-AI females

What can you expect when calving time comes after AI breeding? Don’t worry, it’s not a wall of calves. Check out this list for what you can expect.