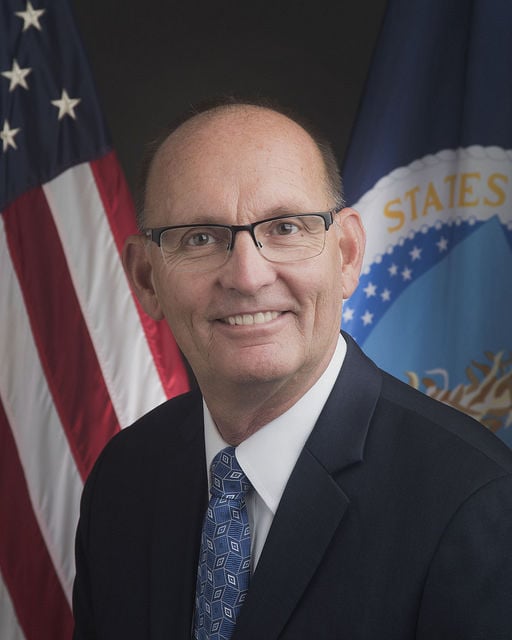 Under Secretary of Agriculture for Marketing and Regulatory Programs Greg Ibach

While the nation watched Facebook’s Mark Zuckerberg grilled by Congress over data privacy, federal officials and industry leaders stressed that data privacy and producer choice has to be at the center of the traceability conversation.

“Congress is very interested in our [animal disease traceability] program,” said Dr. Jack Shere, DVM, deputy administrator of the Veterinary Services and Chief Veterinary Officer with the USDA. Shere spoke to attendees of the National Institute of Animal Agriculture (NIAA) annual conference on traceability on April 11.

“Various factions on the hill would like to see a mandatory program. We have to stave that off if we can, but we need to work together.”

Shere explained that the approach USDA, the Animal and Plant Health Inspection Service, and Veterinary Services is taking to traceability is one of collaboration.

“We want to work together. We want to help the industry get to where they need to go. We want to build a program that works—one that works for the animal health officials that have to regulate the program, and one that works for the industry at the speed of commerce, but we also want to build something that is utilizable for all of the different sectors. So, we’re not going to step out and codify any certain thing. We’re looking for industry and animal health officials to kind of tell us where they think this needs to go.”

In an April 9 interview with WLJ, USDA Under Secretary of Agriculture for Marketing and Regulatory Programs Greg Ibach echoed this collaborative sentiment.

“I'm hearing a lot more interest in what can we do to work together with the beef industry to be able to move traceability programs forward,” he said, speaking to WLJ before presenting the keynote address at the NIAA conference.

“Private Industry has done a lot of things right in developing technologies and helping make those technologies work at the speed of commerce, offering options for producers to choose from. At USDA, I think we can embrace trying to figure out how we develop those portals and connect with those private information banks so we can access information we need at the state or federal level in the event that we do have an animal disease emergency.”

“Throughout the years of discussion, it’s become very evident that producers are concerned about sunshine laws or access by outside groups to information that government might hold in their databases,” Ibach commented to WLJ.

“So, the philosophy of having private companies develop and house that information and we develop the portal for the government if it’s needed is really the answer to that concern.”

Shere also spoke to the concern of producers over data control.

“We, federally, are not interested in holding the industry’s data. I don’t want it for a lot of reasons,” he added, noting that he’d need to create a whole new staff if the federal agency was to hold producer data.

“What I’d like to do is build a portal system where I could get into the states’ systems when I need it for disease purposes.”

This topic of portals was repeated throughout the conference by USDA officials and industry members.

Shere said that Ibach “wants us out of the ID business from the point of view of what the technology is. He wants industry to tell us what that should be.”

The supremacy of choice

Shere’s last point could come into conflict with the culture of the cattle industry.

Joe Leathers, general manager for the 6666 Ranch and a chair of the NIAA/USDA Cattle Traceability Working Group (CTWG), stressed that whatever traceability framework that is created must be a choice.

“We have already in place some mandatory traceability,” he observed.

“If you take the control or freedom out of the United States and the producer of the livestock industry’s hands, I promise you you’re going to have a war,” he warned listeners of the CTWG discussion panel.

The CTWG is a very new group under NIAA and its goal is to “enhance cattle identification and traceability to better serve the needs of producers, marketers, exporters, and animal health officials.” The group is working on a model to recommend to industry and the USDA for moving forward with a traceability program.

“What we built into the model that we have up to this point I think has those things built in; choice and flexibility and hopefully the opportunity to accomplish what we need for the state and federal animal health officials.”

Ibach seemed to share this focus on industry-led efforts, telling WLJ, “I think the free market will actually identify those products and systems that producers and livestock auction markets and feedlots and harvest facilities can and will embrace.”

The traceability discussion has room for all ID technology

In the ongoing discussion over animal disease traceability, the matter of ear tag technology comes up. The government wants to see RFID, but industry argues that traceability can embrace all ear tags.