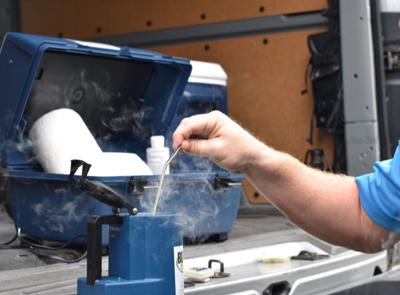 Although less than 10 percent of beef producers utilize artificial insemination (AI) in their herds, use of the reproductive technology is growing. For those just getting started with AI, or those with an already established program, here are some management considerations to improve and optimize success in an AI program.

“Part of the benefit of AI is synchronization—calves are older and heavier, and it’s not merely because of genetics,” Funston told WLJ. “Because they breed earlier in the breeding season, you can get some benefits of an AI program without AI by using synchronization and natural service. If you’re not going to AI, I would still consider synchronization, whether it be the entire cow herd or at least the heifers.”

Funston coauthored a paper in 2018 called “General management considerations to improve success of artificial insemination and natural service conception rates.” The paper addresses the benefit of using AI, and some of the things to do before and after the process.

A common concern producers have with AI is the amount of labor and time associated with the technology.

“I don’t think that should be a concern,” Funston said. “A few things have evolved: People that are full service will come in and do everything for you—or whatever you want them to do—and with the evolution of better synchronization programs we now have systems where we don’t have to do any heat checking. We can just time breed everything, so that alleviates a lot of the time and labor concerns.”

Fixed-time AI protocols (FTAI) adoption has been increasing due to a changing market structure that recognizes and incentivizes genetic improvement, according to the paper.

“FTAI protocols that result in pregnancy rates similar to AI following detection of estrus, result in calves being born early in the calving season, resulting in more pounds of calf weaned, which is a tremendous economic gain,” the paper reads.

Before starting estrus synchronization and FTAI, there are a few options on where to start. The paper recommends feeding MGA (an orally active progestin that suppresses estrus and prevents ovulation) for 14 days to heifers, and turning bulls in after MGA withdrawal for natural service; or turning bulls in on day 1 of the breeding season and injecting heifers and cows with prostaglandin F2alpha (PGF) on day 4. PGF synchronizes estrus and ovulation in most females.

Feeding MGA is advantageous because it doesn’t require any trips through the chute and some prepuberal heifers will be induced to cycle early, the paper says. However, MGA has to be fed daily and at the right dose for 14 days.

Using PGF requires only a single trip through the chute for injection, but all heifers and cows need to be cycling in order to respond to the hormone.

Once becoming comfortable with implementing an estrus synchronization protocol with natural service, it shouldn’t be too difficult to switch to AI.

In a FTAI program, all females are injected with GnRH to synchronize ovulation, and are inseminated at a predetermined time. Since there is no heat detection with FTAI, it is normal for pregnancy rate to be higher following FTAI compared to protocols dependent on estrous detection, since ovulation is induced and semen is deposited in all the females in FTAI.

In an estrous detection protocol, only the females detected in heat are inseminated.

“I think we need to be cautionary in when we select sires, and that we aren’t selecting animals that don’t fit the environment,” Funston warned. “We always blame the mechanics of the AI program, but we need to be cognizant—we can’t have animals that have excessive growth or milk without changing stocking rate; otherwise, reproduction will suffer.”

When choosing a sire, the following questions need to be addressed: Will you be raising your own replacement heifers or purchasing them, and how will you market the calves?

If raising replacement heifers, emphasis will need to be on maternal traits. If buying replacement heifers elsewhere, then maternal traits are not as important. You will also need to think about how you will be getting paid: Producers that sell at weaning should place pressure on preweaning growth, whereas producers that retain ownership and sell on a grid should emphasize carcass weights, marbling and ribeye area, according to the paper.

Another consideration is whether a sire’s semen has worked in FTAI before. Differences among sires in pregnancy rates have been noted; just because a bull has a good conception rate after heat detection does not ensure he will perform equally well when ovulation is induced and insemination occurs at a predetermined time.

If a large number of females are not cycling at the time of implementing a synchronization program, a progestin-based protocol will be necessary. Most herds will have a mix of cycling and anestrous females at the beginning of the breeding season. An effective protocol must induce a fertile estrus or ovulation in both groups of females.

Things to do during

Accurate records will allow producers to check the reproductivity efficiency of each animal, as well as the skill of the technician. Stress can suppress heat expression and decrease conception rates, so stress-free handling and facilities and essential.

Estrus synchronization protocols must be followed exactly. Utilizing a synchronization planner will help alleviate problems with following protocol, Funston said. “It’s very important that protocols be followed and correct shots be administered,” he said. “I don’t think I’ve ever had a year that hasn’t had a mistake of someone giving the wrong shot at the wrong time.”

High pregnancy rates to FTAI are dependent on proper semen handling and insemination technique. The location of semen deposition in the reproductive tract will have a significant impact on pregnancy rates.

Things to do after FTAI

Nutrition is as equally important following FTAI as it is before.

“Heifers can get too fat and then they still cycle and appear to have a good synchronization rate and everything seems great,” Funston said. “Then post-breeding they go to grass and don’t continue that gain. Consequently, we have what we believe is more embryonic loss, when those cattle are not gaining what they did before breeding after breeding.”

Shipping cattle soon after breeding can induce stress and lead to embryonic or fetal mortality. The best time to ship cattle is before synchronization or within four days of FTAI.

In earlier years, breeding cows by artificial insemination was a time-consuming job, but is much easier today with synchronization protocols.