Sign Up
Log In
Purchase a Subscription
You are the owner of this article.
Edit Article Add New Article
You have permission to edit this article.
Edit
Welcome, Guest
This Week's Paper    |    Markets
News
Publications
Markets
Classifieds
Sale Reports
Community & Events
Livestock Tours
Contact Us
Subscribe Now
Share This
1 of 6 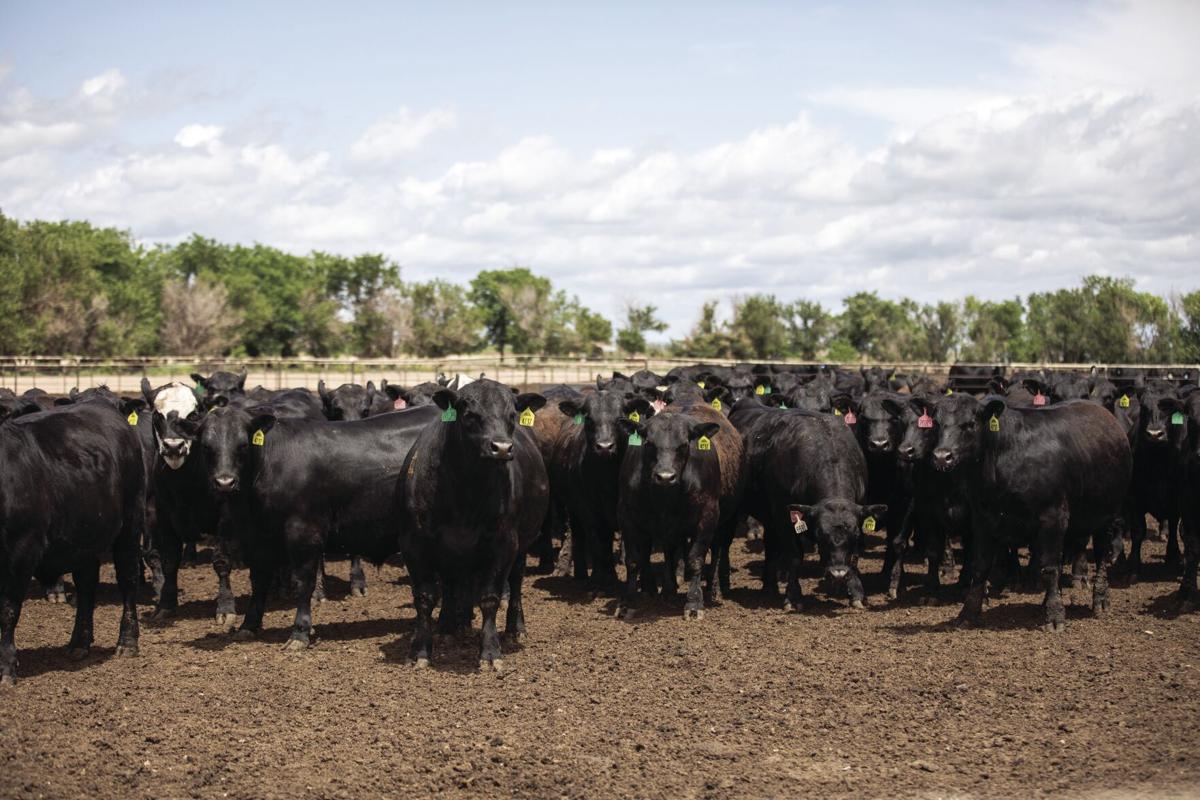 Curious cattle in a lot at Shaw Feedyard in Ashland, KS. CAB. 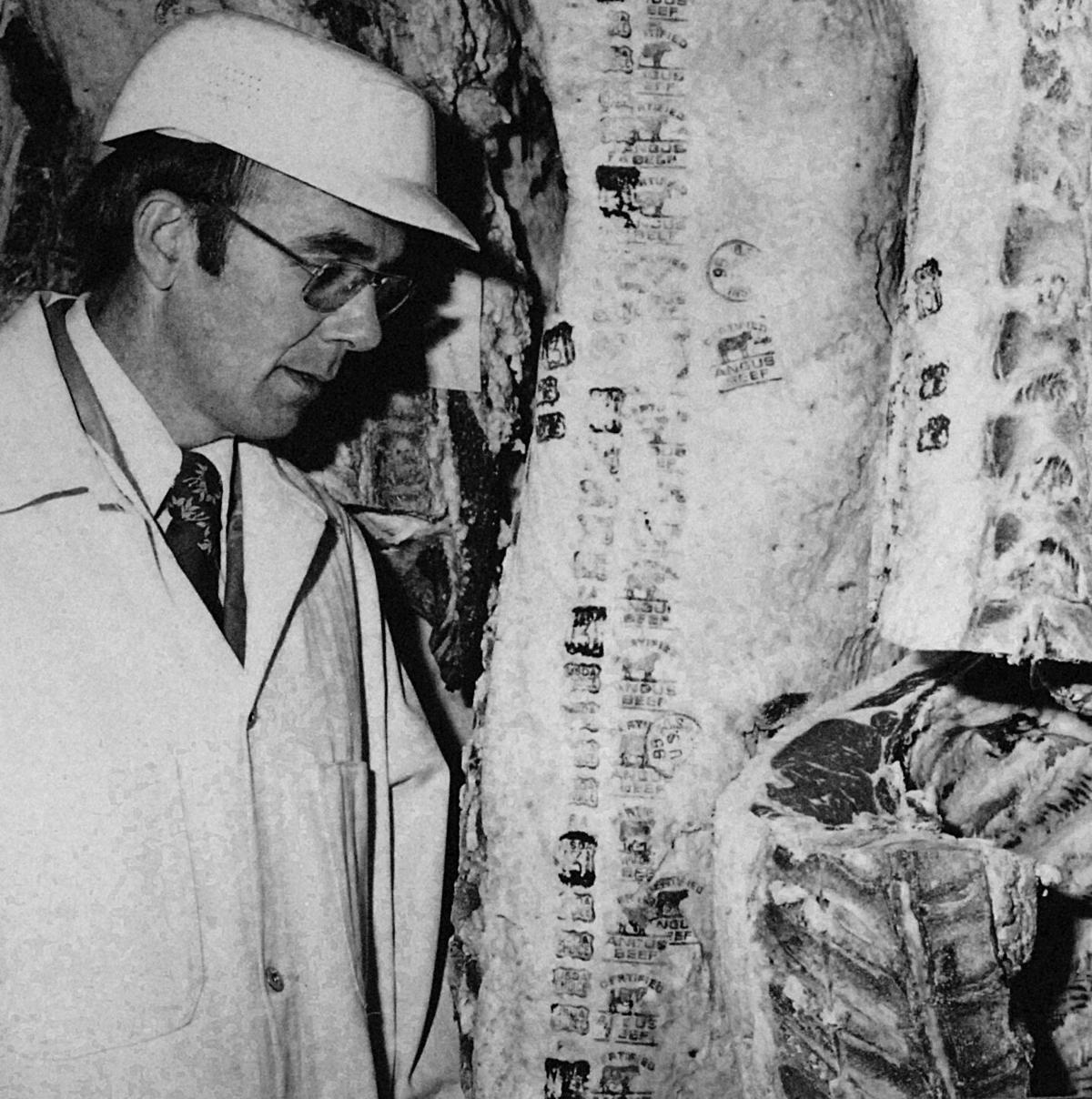 Mick Colvin, the founder of the Certified Angus Beef (CAB) brand, inspecting one of the first CAB-graded carcasses. CAB. 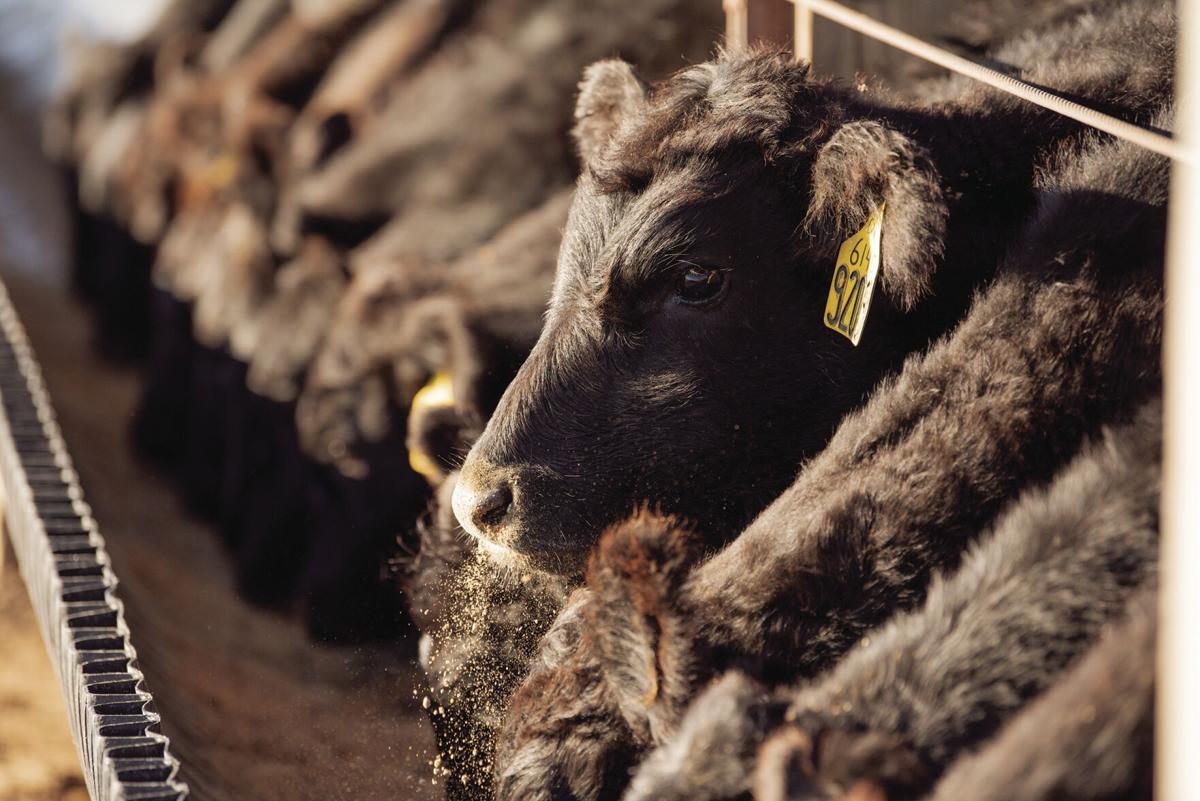 Cattle eating at the bunk of the Jackson Agricultural Research Station at Ohio State University. 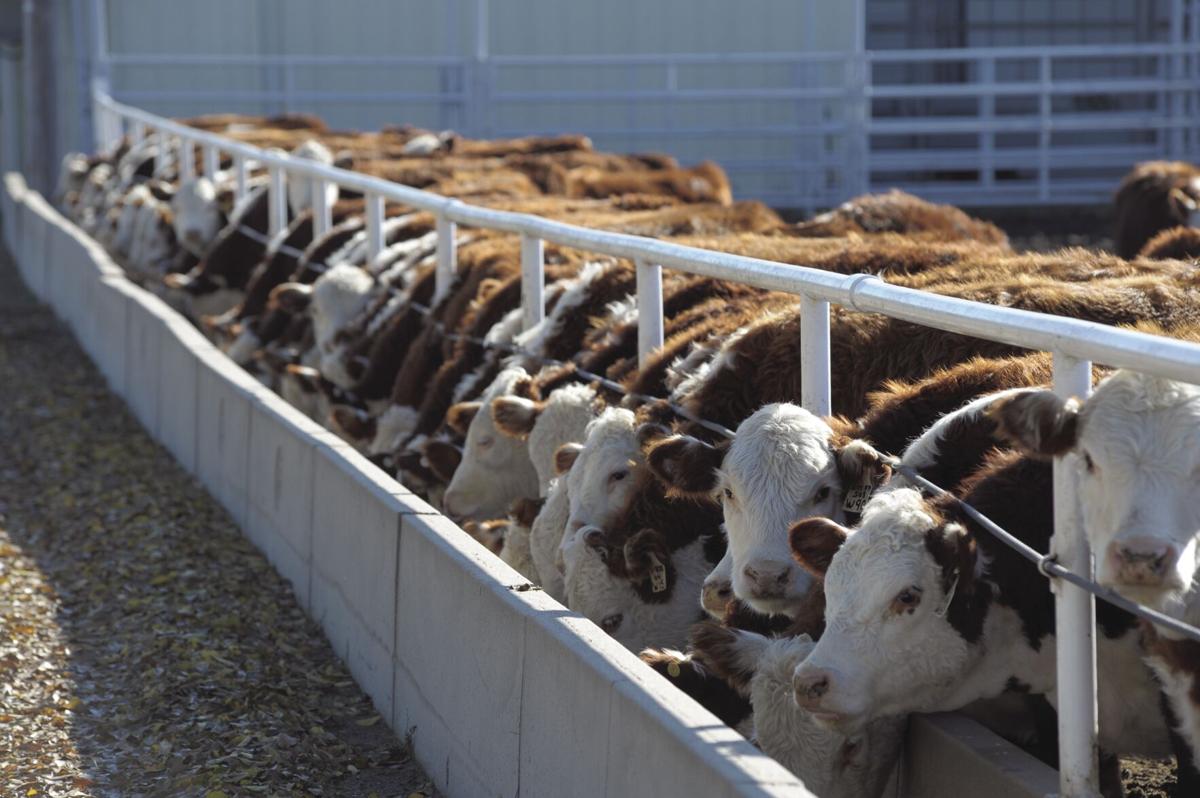 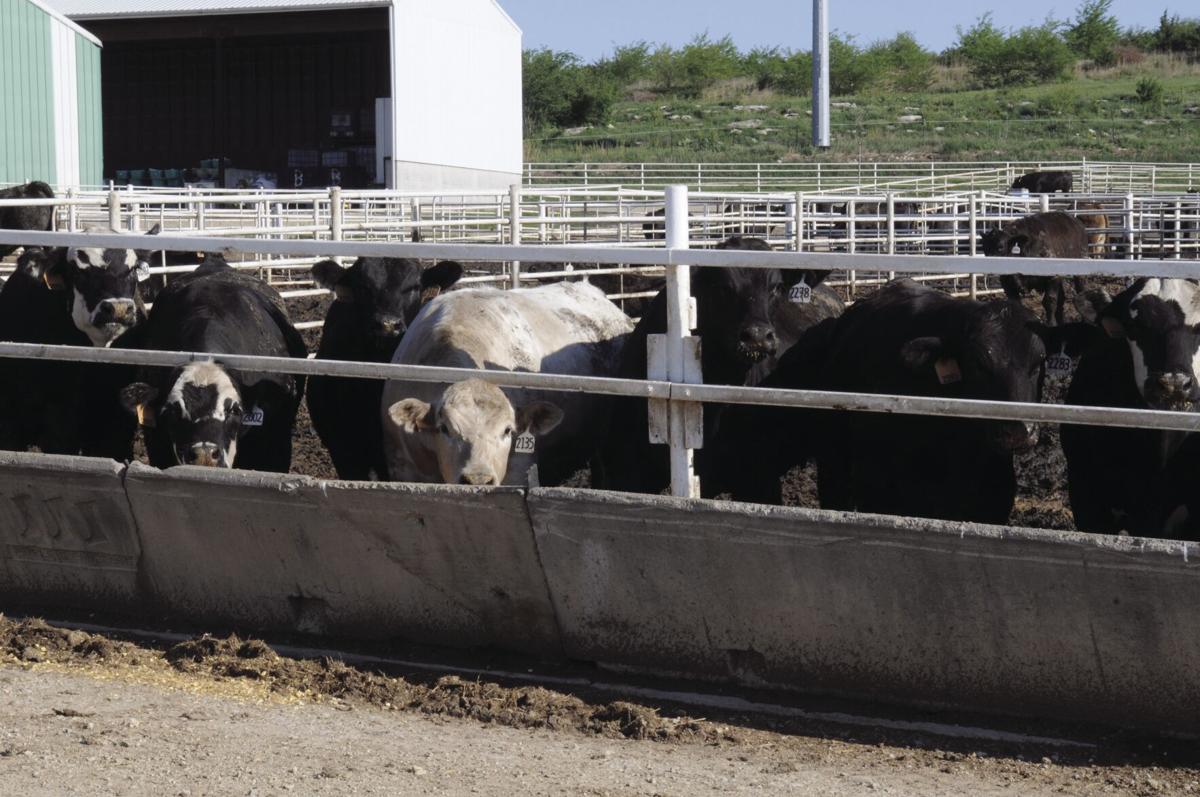 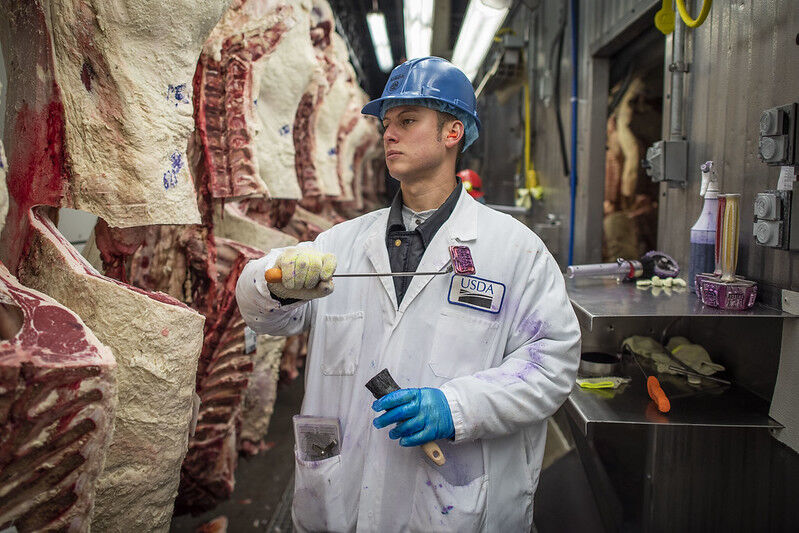 In the big scheme of things, our industry’s move from the city stockyards to the High Plains; the invention of boxed beef to make these High Plains packing plants truly feasible; and the rapidly evolving way we market cattle to high-efficiency plants has occurred with tremendous speed.

Our industry’s focus has gone from a “war on fat” and portion control, to new targets where carcass size, quality and the amount of tolerated fat waste is a 180-degree turn from 30 years ago.

Let’s examine where the industry was in the 1990s, which people looking through rose-colored glasses think of as the “good old days” of cash marketing. In fact, by the late 1980s, the country’s largest feedlots—primarily in West Texas—had already moved to proprietary agreements with a packer. This caused an uproar within the cattle feeding industry against packers having captive supply.

Moving north into Kansas, cattle were primarily sold live, with trucking arranged and paid by the packer. Nebraska was primarily an “in-the-meat” (carcass weight) market where the feeder paid the trucking. Finally, Colorado was primarily a live market, with some in the meat market.

Unlike today, there were still many small yards that were not in the market regularly and access to buyers was becoming a problem for them. Today, they have effectively stopped finishing cattle and became backgrounding yards, providing a tremendous service to our industry.

Before the internet, people had “DTN machines,” which received signals off a relatively small satellite dish via a cable, allowing a person to track the markets, board, weather and other relevant information. A manager would develop their “show list” of fed cattle for sale that week and packer buyers would stop to see the pens on the show lists. The pens would include both high- and low-quality cattle that would sell at one price.

However, very little trade occurred during most of the week. As the feeder and packer played chicken with each other, the natural interest for the feeder was to push for a higher price, and for the packer, a steady or lower price. Tension would grow during the week on who would give in.

Finally, the feeder or packer would capitulate and the market would be established. This news would be broadcast on the DTN machines and in not-too-many hours, the trade would have occurred for the week.

It was all about inventory control. The packer needed blood on the floor and the feeder needed fed cattle harvested to make room for incoming cattle. This was all well and good if the feedlot owned all the cattle, but retained ownership was becoming popular.

When cow-calf operations had pens of top-end calves in the yard and received the same price as the poor-quality pens, the inequity of the system was laid bare. This all changed with value-based marketing, as the ability of the feeder to schedule cattle for processing was as important as any aspect of the value-based system.

One of the first efforts at value-based marketing was done by the American Gelbvieh Association, when Monfort experimented with “hot fat trim,” which peeled the external fat off the hot carcass. Very innovative for its time, cattle scheduled were primarily paid on a formula, which pitted the price against the plant average of other hot-fat-trim cattle.

It was a highly innovative value-based system, but the hot-fat-trimmed system was a failed experiment that resulted in “cold shortening” that occurs on a carcass with no cover, making the meat tough.

Next up, the Red Angus Association went a different direction, building value signals derived from the Oklahoma State University boxed beef calculator, which dictated set premiums and discounts after the base price and Choice/Select spread were established. This system was finally fully established when a former employee of Gelbvieh moved to a packer working with Red Angus.

In the terminology of the day, a formula was working against plant average, while a grid set premiums and discounts that spun off the base price and spread. Since most cattle were sold live or in the meat, establishing a base price was easy. One of the big features for all parties was inventory control.

Let’s move to today. The small feeders are largely backgrounders for the big feeders. This, in theory, gives more power to the fewer feeders that control most of the cattle. By the same token, there are fewer packers, making it a standoff. Although the number of pricing systems has exploded, with seemingly one for each big feedyard, the formula-pricing system based on plant average has come to dominate.

The problem with formulas is they are like a dog chasing its tail. To receive premiums, you need to constantly send in better cattle, but as the cattle get better, so does the plant average, creating a cycle where it is hard to get ahead. At one time, cattle could hit $100 premiums, while now $30 is hitting a lick.

Base price is the key to the system—it always has been. If you start $1-2 back on what should be the base price, it is hard to make up the ground on value-based systems. Also, regional price discovery is largely gone, which has been replaced by the five-state average. This is a bit of a complicated mix: converting live trade cattle with those priced as carcasses into a single base price.

The mainstay of value systems is still scheduling the cattle when it is advantageous for both the feeder and the packer. If calves are scheduled to come in, it is imperative that fed cattle go to the plant to free up pen space. If the feeder can keep the board in their favor in order to lock in a reasonable profit most of the time, or an acceptable loss the other times, the system works. That has not always been the case as of late, with too much equity being drawn out of the feeders by the packers.

It is self-defeating to kill the roots of a tree and expect the tree to stay alive. This must be rebalanced, but we need to ask ourselves whether to work it out within our industry or have politicians from New York City and Newark, NJ, pricing our cattle. The latter might have appeal in the short term, but the long-term consequences will likely be something we will sorely regret.

The profit potential based on value for “program” cattle is increasing in importance. Considering what some managers will pay for feeder cattle eligible for a program, marketing at a premium is imperative. “Program” is actually a fairly nebulous term that can mean a lot of things. Watch any Superior Livestock Auction video sale, and many of the lots are a veritable Christmas tree of symbols indicating programs they are qualified for.

These can range from genetics, health programs, implant status, antibiotic use and even animal-handling practices. This leaves many questions regarding what these programs are worth to a feedlot.

Generally, program cattle’s value comes down to the cattle feeder having the ability to shield themself from risk or improve eligibility for premium programs. Examples of programs that shield a feeder from risk would be health programs and genetics. Other programs, like natural cattle, can actually expose a feeder to risk, but have the potential for a high payout at the end.

Therefore, the answer to whether these program cattle are worth more money is generally yes, but like anything is situationally dependent. Let’s look at specific examples of avoiding or accepting risk for the potential of a significant premium for the fed cattle.

Avoiding risk is pretty straight forward. For instance, buying fully preconditioned calves that have less morbidity upon arrival at a feedyard will feed more profitably and do better on the rail than cattle that have been sick. Cattle with superior genetics should have better closeouts and cattle with hide colors that are eligible for branded programs in packing plant cooler sorts also decrease risk.

At the opposite end of the spectrum are natural programs. These programs come with increased profit potential, plus more risk due to potential health problems, extra days on feed with a lower energy ration, absence of an intake regulator, extra bunk management, and no implants. However, the premiums will more than make up for all of that, as long as the cattle are reasonably heathy and can meet the program specifications.

“Failure is not fatal, but failure to change might be.”

“Failure is not fatal, but failure to change might be.”

These smaller product lines need supply 52 weeks out of the year, which can’t be accomplished through spot buying. Therefore, they need to line up yards that can supply them regularly all year. A small feeder selling on the spot market may or may not have access to a program when they want to market, which must be considered when buying feeder cattle.

Value-based marketing has evolved tremendously over just a 30-year period, and there is no expectation that pace of change will slow down. However, the industry must bring more balance to the system than we have now. All segments in our industry must have the expectation of being profitable over a given time.

This is as opposed to a constant drain of equity from one segment to the next. Value-based systems are certainly a way to accomplish this if they are designed correctly, based properly, and targeted to a particular consumer need. The famous college basketball coach John Wooden may have summed it up best: “Failure is not fatal, but failure to change might be.”

It is increasingly common for commercial cow-calf producers to purchase their replacement heifers, or sometimes cows, instead of developing replacements themselves. There are a number of sound economic and management reasons that this is becoming the preferred route for many producers.