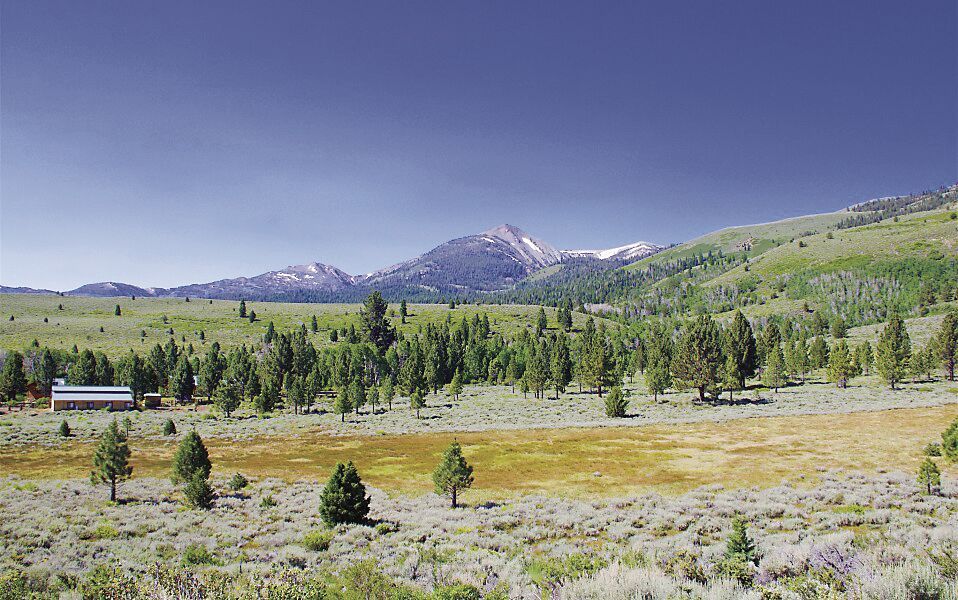 Cow Camp Ranch is located on the eastern slope of the Sierra Nevada Mountain range at an elevation of 7,350 feet. Photo by FarWest Real Estate. 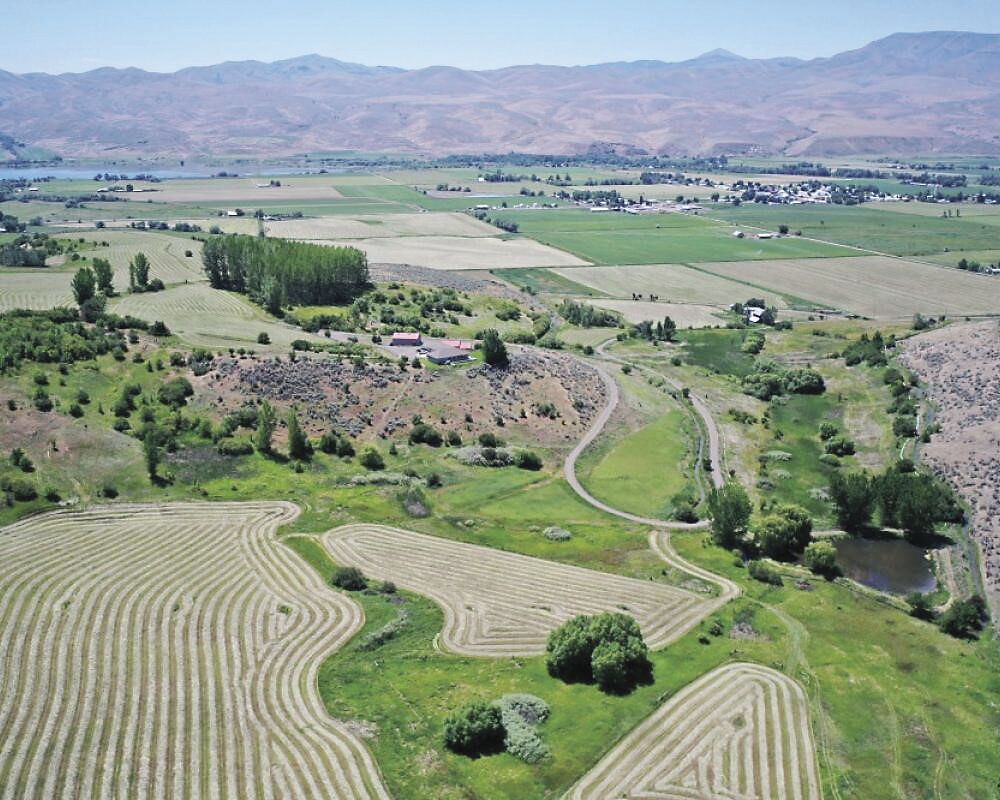 Pheasant Ridge Farm is situated in Oregon’s peaceful Eagle Valley in Baker County. The ranch could be an owner-operated cattle ranch, a recreational hunting sanctuary, a vacation rental, a corporate retreat, or an outfitters headquarters. Photo by Hayden Outdoors.

The Far West was not immune to the COVID-19 buying spree experienced in other parts of the West, with sales surging in the summer and continuing throughout 2020.

While the USDA’s Land Values report released in August 2020 showed a modest 0.2 percent increase in farm real estate average value per acre above 2019 levels, brokers reported prices are rising steadily, and land is selling quickly if it is priced right.

Austin Callison, principal broker for Hayden Outdoors in Idaho and Oregon, told WLJ inventory is low across the board on all types of properties and prices have increased over the years.

“You know that has been the trend before COVID-19 hit and everyone was in a bit of a shock in the springtime of 2020, but in the summer, it started taking off again. Then in the fall and winter, it has been just nuts.”

Morgan Nevin, sales agent at Far West Real Estate, told WLJ inventory is the lowest it has been in years. Not many properties in Northern California and the northern Nevada region have come on the market. Although Nevada offers the benefits of being a tax-friendly state, Nevin stated the possibilities of working remotely allow buyers to purchase properties away from urban centers.

“In recent years, people have been coming to Nevada,” said Nevin. “But in California, the market for land, ranches and recreational properties that are a bit out of town have become more popular in recent years, and I think COVID-19 catapulted it with people wanting to get out of the cities and wanting to recreate and get away from other people.”

Northwest Farm Credit Services (FCS) released its 2020 market report for land values and stated a limited supply of agricultural properties has led to increasing land values in the last couple of years, coupled with strong demand. Of the appraisal staff surveyed at Northwest FCS, 52 percent stated the supply in their area is low, while 48 percent estimated a moderate supply. The report also noted 69 percent of the appraisers rated demand as high, with 31 percent estimating demand to be moderate.

The report cited the increase in land values is attributed to “increased demand for residential and rural property resulting from COVID-19 issues in the more highly populated areas where some residents want to relocate to less populated areas. This is a common theme across the Northwest, with numerous cases reported throughout the region of strong demand or at least numerous inquiries relating to the desire to relocate.”

Callison said buyers are coming from all over the West and “a fair bit of people” from the Midwest and East Coast are looking at a wide variety of properties. Callison currently has 23 properties listed with building, recreational, farming and ranching possibilities. The most significant demand has been for horse properties of five to 10 acres, with these properties receiving multiple offers over the asking price.

Callison also stated he sold a 400-acre irrigated pasture to someone from California looking to move their operation to the area. He also has a few buyers interested in larger cow-calf operations, and they are either not for sale, or the seller wanted too much money for it. These buyers want to have it “pencil out” to make financial sense and have a “legacy property” to run cows on.

As with other brokers throughout the Southwest, Callison stated people are concerned with the potential changes in capital gains taxes and 1031 exchanges under the Biden administration. Currently, he has buyers looking to invest their monies after selling businesses and reinvest in larger cattle operations.

Callison said Idaho is an attractive area for relocation as property taxes and living costs are lower than other states in the West. While property taxes are 1 percent of the assessed value, the state has a $100,000 exemption if it is the primary residence. Also, the abundance of hydroelectricity makes utility rates lower and the cost to irrigate is significantly less.

The California chapter of the American Society of Farm Managers and Rural Appraisers’ (ASFMRA) 2020 Trends in Agricultural Land and Lease Values report showed that demand for rangeland in the state depends on the area.

In the Sacramento Valley, dry pasture and rangeland values are “somewhat strengthening,” with the majority of acquisitions being from existing cattle operators. The report shows demand is moderate to strong in northwestern portions of the valley with values of $650-$2,500 per acre on “very limited” sales activity.

In the state’s mountain region, ASFMRA stated there had been good demand for irrigated and non-irrigated farms, ranches, and livestock grazing. Cattle ranches in Lassen, Modoc and Siskiyou counties are divided into “inside operations” (0-15 percent public land) with values at $5,000-8,000 an acre, and “range operations” (>15 percent public) listed for $4,000-6,000 an acre.

In counties by urban areas such as Santa Clara and Monterey counties, and the Central Coast region, ranches are being sold as “lifestyle” ranches and the buyers “reflect a stronger investor influence.”

ASFMRA stated, “While most of the ranches are capable of supporting livestock production, recreational influence is strong and has contributed to the demand.”

Nevin stated buyers are looking at purchasing property as investments and tax shelters and are somewhat concerned if the tax laws are going to change. According to Eric O’Keefe, editor and founder of The Land Report, “Land as an investment-grade asset has enjoyed a banner 2020. Clearly, the value of a remote or a removed getaway has become a much-coveted quality. Productive cattle ranches and top-tier recreational properties have continued trading at the levels they were listed at. When it comes to the value of their portfolios, landowners definitely sleep better.”

Water rights continue to be an issue in California and Nevada, with Nevin stating it is a significant driver. ASFMRA reported farm and water right sales in the Fallon area of Nevada and Mason Valley and Smith Valley, indicating a stable market. Some regions of the state rely solely on pumped groundwater, and those sales showed stable market conditions. The number of cattle ranch sales is limited in Nevada but continued to indicate stable prices.

For California, ASFMRA reported the influence of the Sustainable Groundwater Management Act was apparent in many areas as market participants began to fully account for anticipated changes in the water supply. Some areas of the state that relied on wells for irrigation or were unable to utilize groundwater resources saw a decline in value or sold for values lower than land in a water district or had access to groundwater.

Asked what he anticipates for 2021, Nevin stated it will be “on par” with what he has seen in 2020 with people holding land as an investment.

“It’s a seller’s market for a lot of real estate, inventory is limited, and buyers are all over the place. Prices have appreciated more for residential, but farm and ranch prices have appreciated well. I don’t think it’s going to slow down unless something catastrophic happens.” — Charles Wallace, WLJ editor

Far West dry conditions not likely to let up

While much of the country has been experiencing unprecedented low temperatures and snowfall, much of the Far West continues to hope for rain. Most states are behind in terms of normal precipitation and are still experiencing high levels of drought.