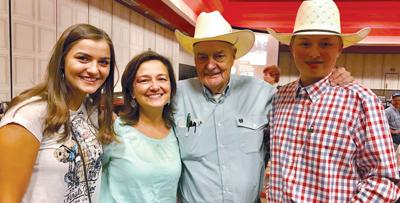 If there is a source of immortality, it surely lies in the courts. No issue that has gone to court ever seems to be put to rest but is instead endlessly revived through the appeals process. Such is the case with the Hammonds’ grazing permits.

On Dec. 20, Oregon District Court Judge Michael Simon ruled that then-Secretary of the Interior Ryan Zinke violated his own department’s rules when he ordered the grazing permits of Steven and Dwight Hammond as his last act in the position.

The ruling effectively revokes four public grazing permits held by the Hammonds. The permits expired in 2014 and the Bureau of Land Management (BLM) denied the Hammonds’ renewals of the permits, citing their violation of grazing regulations in the form of setting fires, two of which led to their conviction and imprisonment.

Simon ruled partially in favor of plaintiffs Western Watersheds Project, Center for Biological Diversity, and WildEarth Guardians in their ongoing litigation against the BLM, Secretary of the Interior David Bernhardt, and Jeffrey Rose, the district manager of the Burns District BLM. He ruled that then-Secretary Zinke had violated the Administrative Procedures Act when he ordered the Hammonds’ grazing permits be reinstated and vacated the reinstatement.

History of the issue

In summary of the long-running story of the Hammonds and their grazing rights, Steven and Dwight Hammond were initially indicted in 2010 and tried in 2012 for numerous fires set on their own land that had spilled over into adjoining BLM land dating back as far as 1982.

The 2012 jury trial found both Dwight and Steven Hammond guilty of one count of damaging government property by fire—violating 18 U.S.C. § 844(f )(1) established by the Antiterrorism and Effective Death Penalty Act of 1996—related to the 2001 fire, and found Steven additionally guilty of one count in the case of the 2006 fire.

Though the act under which the two men were found guilty requires a minimum of five years in prison, District Judge Michael Hogan gave the Hammonds a lighter sentence, saying the minimum prison terms would “shock the conscience.” The Hammonds served this shortened sentence, beginning in October 2012.

In 2014, the Hammonds’ grazing permit renewal applications were denied by the BLM.

The shortened sentence handed down by Hogan in 2012 was appealed by the government in 2015. Another judge, then-District Judge Ann Aiken, eventually re-sentenced the Hammonds to return to prison to serve the required five years, accounting for time already served. On Jan. 4, 2016, the pair returned to prison as ordered.

Then, on July 10, 2018, President Donald Trump pardoned the father and son pair. They arrived home to Burns, OR, the morning of the next day.

On January 2, 2019, then-Secretary Zinke directed the BLM to reinstate the grazing permits through 2024 on the same conditions as the previous 2004-2014 permits. In his order, Zinke acknowledged that Trump’s pardons of the Hammonds “does not blot out guilt.” However, he said that, “I find that the pardons constitute unique and important changed circumstances since the BLM made its decision,” in reference to the agency’s 2014 refusal to renew the permits.

Given the ongoing government shutdown at the time, the reinstatement of the grazing permits did not take effect until Jan. 28, 2019.

In May of 2019, the plaintiffs mentioned above initiated their suit.

• Had accepted the BLM’s reasons for refusing to renew the permits; namely that the Hammonds had violated the grazing permit regulations, which include prohibitions on burning or damaging vegetation without approval;

• Acknowledged that permittees must be in “substantial compliance with the regulations” to have permits renewed;

• Did not show that the Hammonds were in “substantial compliance with the regulations,” either during their 2004-2014 permits nor afterwards; and

• Did not make a compelling case for how the Hammonds’ serving prison sentence for criminal actions, paying civil fines, nor being pardoned by the president represented “unique and important changed circumstances” relevant to the law.

“Secretary Zinke was required to evaluate [Hammond Ranches, Inc.’s] record of performance and failed to do so,” Judge Simon wrote in his ruling and opinion document.

“[E]ven if Secretary Zinke had explained why relying on the post-permit conduct of the pardons was permissible in this case, he did not provide any reasoned analysis that had a rational basis in facts in the record for granting the Permit.

“Secretary Zinke’s reliance on the pardons, therefore, violated the APA because it was arbitrary and capricious, an abuse of discretion, not rationally connected to the facts before the agency, inconsistent with the governing statutes and regulations, and an unexplained change in agency practice and procedure.”

Simon only partially granted the plaintiffs motions, noting that other topics of their motions were or would be rendered moot by the partial ruling.

The judge additionally opined that the loss of the grazing permits would not be a significant impact on the Hammonds as they have been without them for some time.

“[Hammond Ranches, Inc.] was able to maintain its ranching operation and obtain private grazing for the previous five years when it had no federal grazing permit and, presumably, during this past year when it was allowed only reduced grazing.” — Kerry Halladay, WLJ editor

A trio of environmental groups have challenged the BLM's renewal of the Hammonds' grazing permits, alleging damage to key grouse habitat.