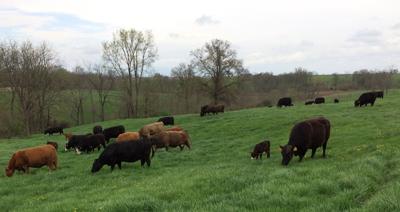 Twelve different breed associations, with the world’s largest multibreed database, have banded together to provide a first-of-its-kind multibreed genetic analysis. This gives commercial producers a common genetic prediction language between breeds to build a crossbreeding system.

The result of this effort is that International Genetic Solutions (IGS) has released the industry’s first multibreed, genomically-enhanced, single-step genetic predictions on the revolutionary BOLT(Biometric Open Language Tools) software. Central to this effort to promote crossbreeding is that the new expected progeny differences (EPDs) are on the same base and scale for all the breeds.

This release is the culmination of four years of research and development by IGS and Theta Solutions. Both hardware and software were developed to calculate the genetic predictions as well as the massive job of cross-referencing and automating the 12 IGS breed association partners’ databases to run weekly National Cattle Evaluations (NCE). These partners are: Simmental, Red Angus, Gelbvieh, Limousin, Maine-Anjou, Chianina, and Shorthorn, and their Canadian counterparts.

Among the partners, American Simmental Association is the first to release the weekly-run EPDs. The other associations plan to release EPDs on their breeds in the coming weeks and months.

Since 2014, one of IGS’ goals has been to advance the genomically-enhanced EPDs from the multi-step process they have been using to a single-step process. With the multi-step process, molecular breeding values (MBV) were calculated from the genomics and then blended into an animal’s genetic predictions for each trait post-analysis. This does not make full use of all the information genomics has to offer. Plus it only impacts the genotyped animal with the information not flowing up and down the pedigree.

To get around these shortcomings, IGS contracted Drs. Bruce Golden and Dorian Garrick to write new software to calculate multibreed, single-step EPDs. They originally envisioned static software would result, but later decided a more dynamic system was needed that would always be incorporating the latest science. Golden and Garrick eventually started the company Theta Solution, which will be able to service the industry with software and hardware solutions to produce the industry’s most reliable genomically-enhanced EPDs for years to come.

Central to Golden and Garrick’s system is their BOLT software that uses a Marker Effects Model for calculating genomically-enhanced EPDs. While other single-step models incorporate all the markers into the calculation of genetic predictions, the Marker Effects Model determines which markers have the most predictive value and weighs them accordingly. Non-informative markers are then discarded. This results in only about 5 percent of the markers being utilized.

The model also only utilizes the most informative marker in a region associated with a causative gene, which avoids “double counting.” When multiple markers are used from within the same region, it can actually infuse bias into the analysis.

The number of progeny equivalents the genomics add to the accuracy of various traits varies considerably from three progeny on maternal calving ease, up to 25 progeny for Stayability.

The low impact for certain traits like maternal calving ease is thought to be due to too few females being genotyped at this point. Of the over 17 million head in IGS’ database, approximately 130,000 are genotyped—the majority of which are bulls. A concerted effort to increase the number of females genotyped is underway by the partners, plus the number of cattle genomically profiled should naturally increase with release of the new analysis.

Utilizing the Marker Effects Model single-step method on the BOLT software presents massive mathematical problems that need to be computed. To solve these advanced mathematical problems, Theta Solutions has their clients utilizing Graphic Processing Units (GPUs) originally designed for the video gaming industry. They are a quantum leap forward in computing power.

When multiple GPUs are stacked, run at high voltage and water cooled, they have computing power that would be hard to imagine in the not-so-distant past. In addition, they are relatively inexpensive in relation to their capabilities.

The key is the BOLT software, which can simultaneously solve a problem on multiple GPUs through advanced programming. An example of the power of the GPUs combined with BOLT software is that they are able to calculate a traditional multibreed NCE in less than 30 minutes when it used to take approximately 50 hours.

Another breakthrough is that accuracies are now calculated instead of the estimated procedure that was used in the past. Calculating them was always too big a math problem to carry out. Now BOLT software combined with GPU hardware has made it possible to accomplish.

The new calculated method derives the equivalent of true accuracies, which tend to be more conservative than the estimated accuracies previously used, especially on young animals. The resulting possible change chart will be more precise and reliable, so it is more reflective of what will be seen in the field.

To accomplish weekly calculation of multibreed EPDs from 12 breed associations is a massive database management problem. An international identification number is now assigned to all animals. This is especially important to cross-reference animals that appear in multiple herdbooks and serves to tie the databases together. These are primarily Angus and Red Angus sires that have been used in the production of hybrid and composite seedstock.

A portal system also had to be developed to automate the uploading of the various databases to the weekly genetic analysis and then download the results back to each breed’s herdbook after the weekly NCE. Quality controls also had to be put in place with each association receiving an error report for problem data. This allows partner associations to address any problems prior to the next week’s NCE.

The release of IGS’ new single-step, genomically-enhanced, multibreed genetic predictions is a quantum leap forward for the industry. It provides the most reliable EPDs possible for a large number of breeds on the same base and scale to aid in designing planned crossbreeding systems. Although Simmental is the first to release their new EPDs from this system, stay tuned in the coming weeks as the other partners come online in this groundbreaking effort. — Dr. Bob Hough, WLJ correspondent

“The release of IGS’ new single-step, genomically-enhanced, multibreed genetic predictions is a quantum leap forward for the industry.”