Sign Up
Log In
Purchase a Subscription
You are the owner of this article.
Edit Article Add New Article
You have permission to edit this article.
Edit
Welcome, Guest
This Week's Paper    |    Markets
News
Publications
Classifieds
Livestock Tours
Sale Calendar
Community & Events
About
Subscribe
Share This
1 of 7 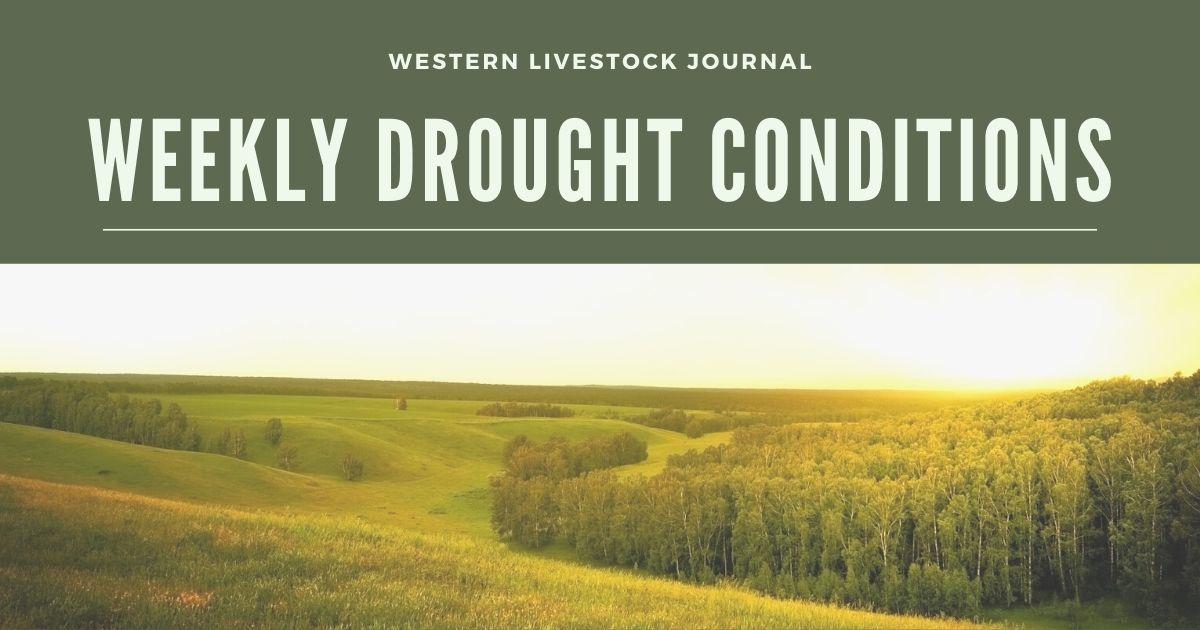 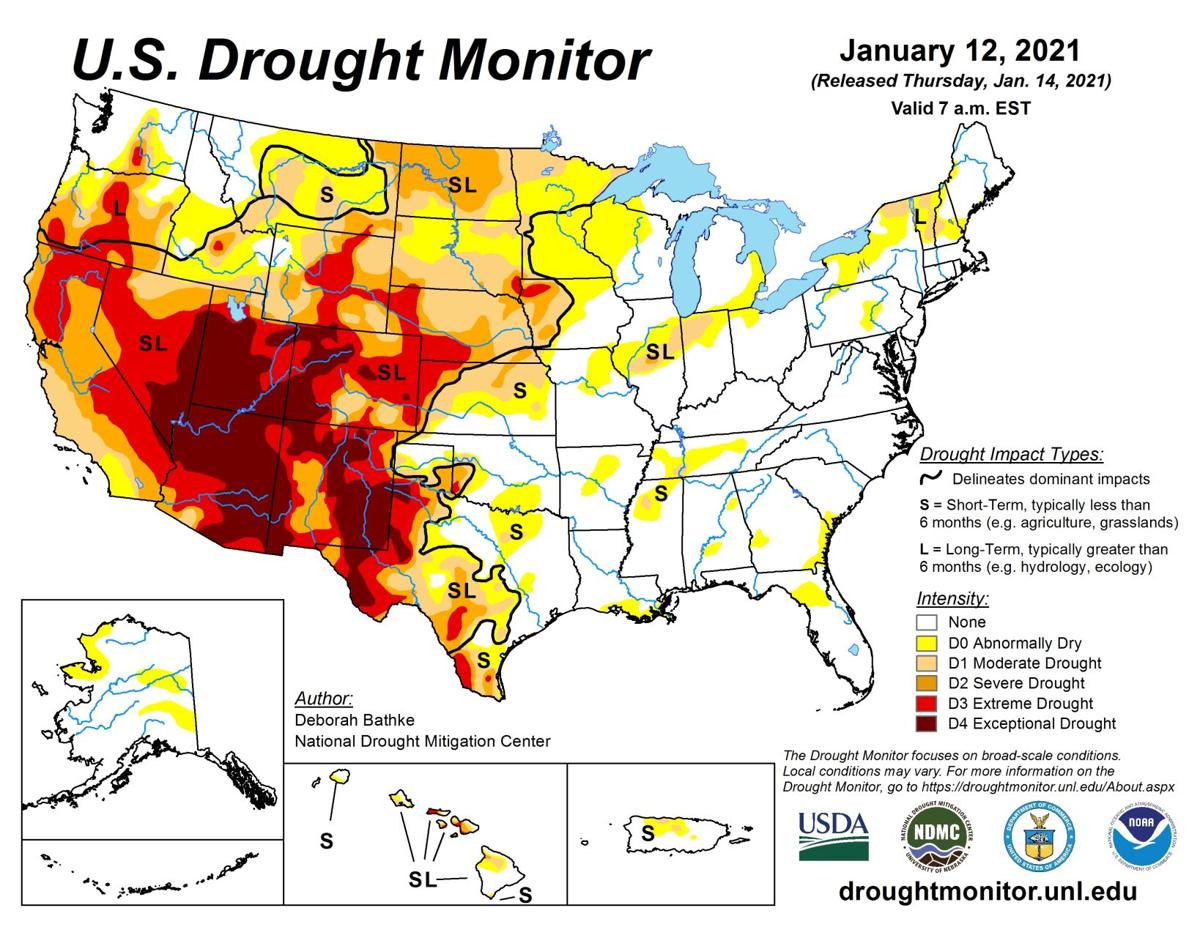 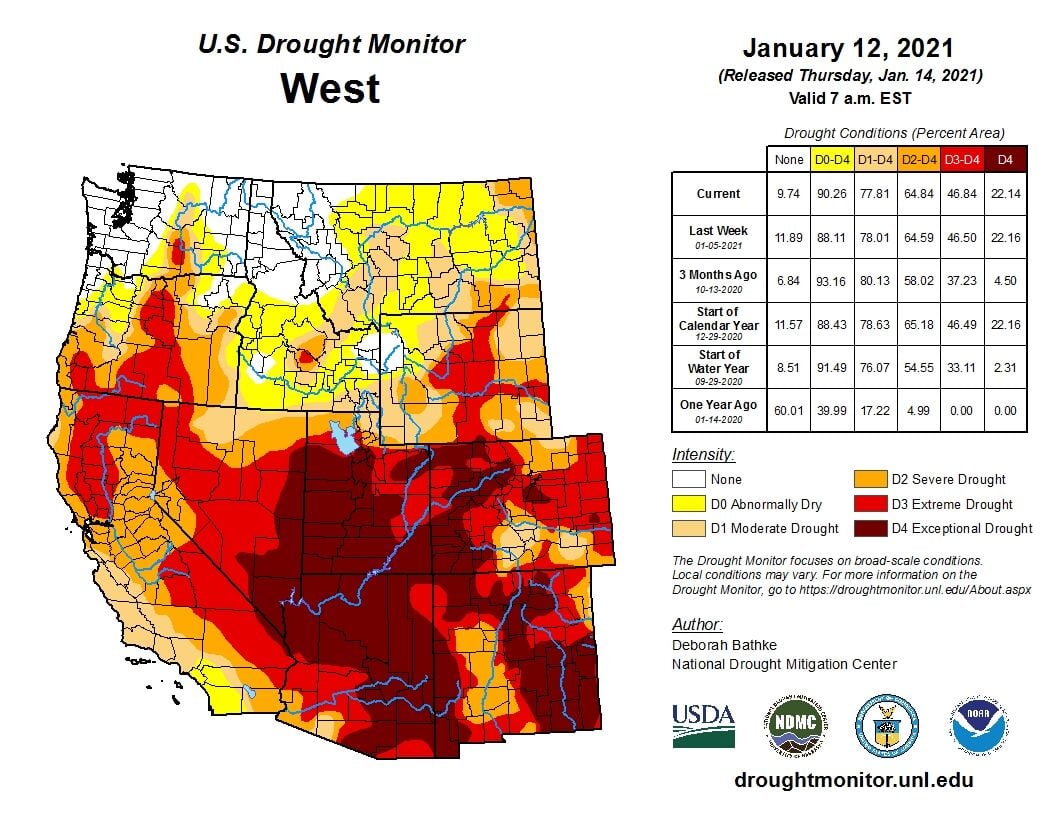 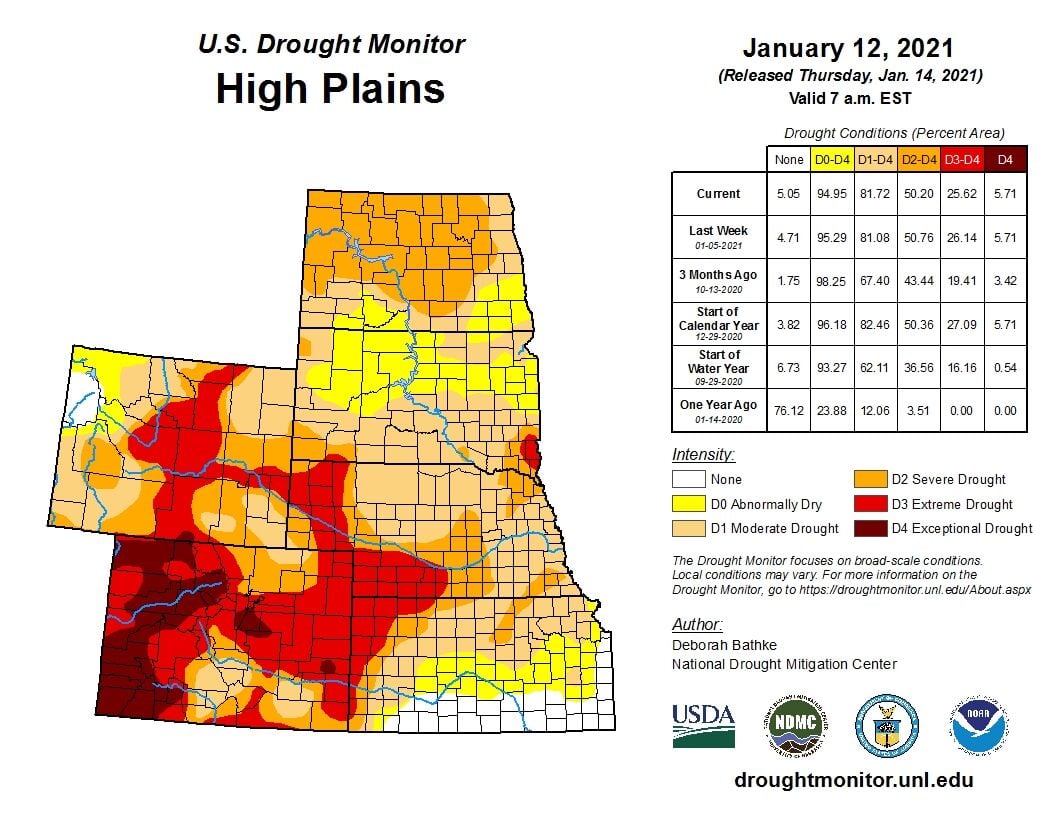 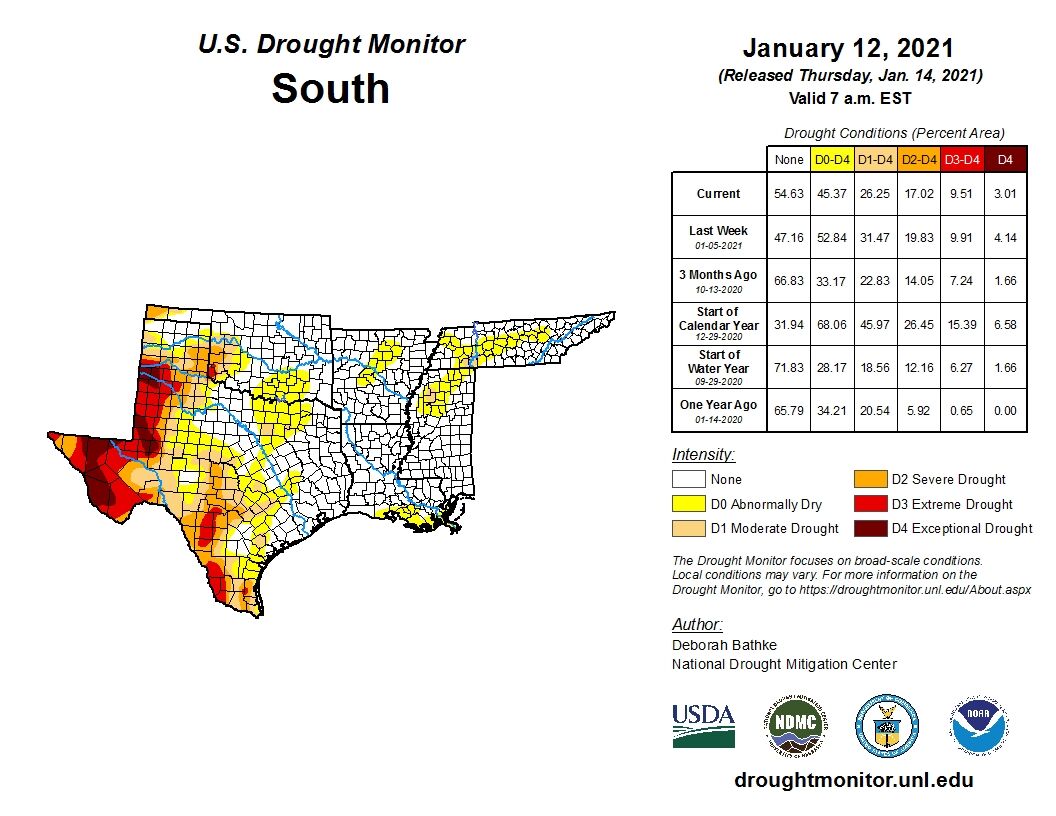 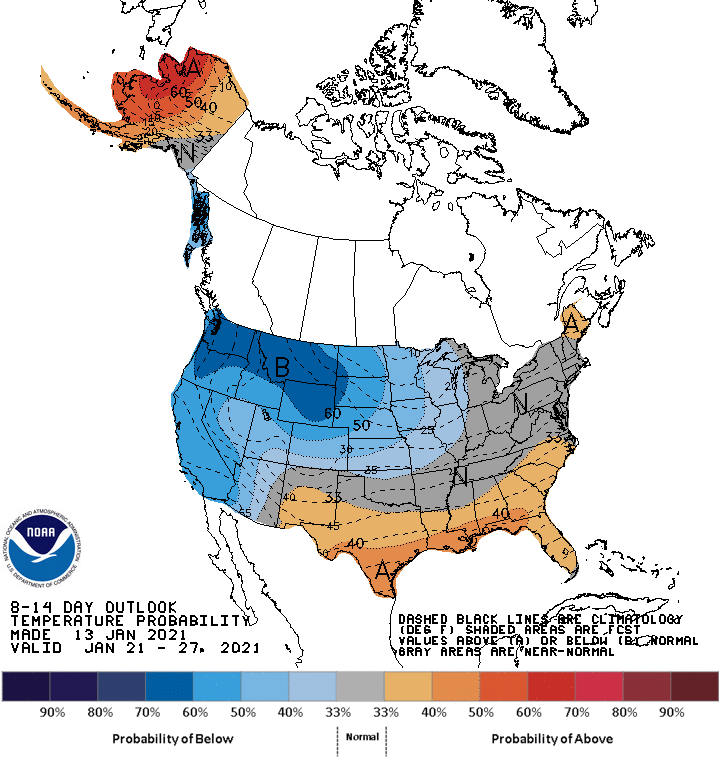 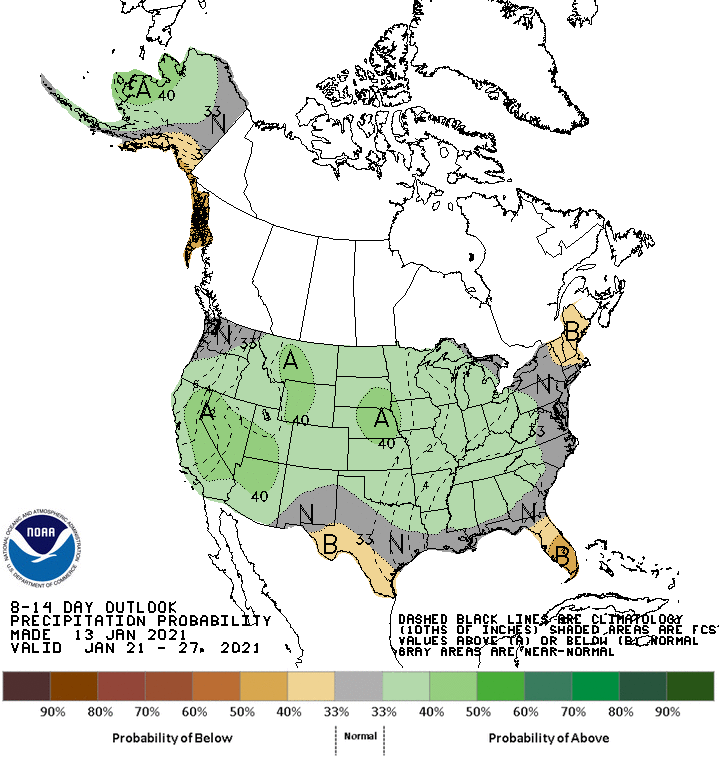 Storms continued to take aim at the Pacific Northwest this week, bringing multiple rounds of heavy rain along the coast and lower elevations and snow to the mountains.

Many locations along the coast have measured rain nearly every day this year. While the heaviest rains fell outside of most of the region’s current drought areas, parts of western Oregon have received 125-300 percent of normal precipitation since the beginning of the year, helping to chip away at long-term drought conditions. A winter storm brought snow to the Rockies and eastern New Mexico before moving eastward.

Several locations from far southeastern New Mexico into western, central and eastern Texas, northern Louisiana and Mississippi were blanketed by at least 6 inches of snow. Dryness continued to deteriorate conditions in Southern California, south-central Oregon, north-central Kansas, and south Texas. In all, the percent area of the Lower 48 experiencing moderate drought or worse stands at 44.85 percent, down from 45.76 percent last week.

While the Pacific Northwest saw continued wet weather, the Southwest remained dry. This has led to improvements in streamflow and groundwater. East of the Cascades, water year-to-date precipitation is well below average, resulting in extremely low streamflows and degradations to exceptional (D3) drought in south-central Oregon.

In the Southwest, moderate (D2) and extreme (D3) drought expanded in central California, where water year-to-date precipitation is less than 25 percent of normal. Except for an expansion of abnormal dryness (D0) in northern Montana, the rest of the West remained unchanged.

Once again, many state drought teams noted that it wasn’t enough to increase moisture availability in areas where rain and snow fell. In areas where it didn’t, such as the Southwest, the conditions either didn’t yet warrant additional degradations or, because they were already in exceptional drought (D4), could not be degraded further. Snowpack and snow-water equivalent is well below normal and soils are dry. Ranchers have noted that natural forage is insufficient or depleted.

The South was hit with another winter storm this week, spreading rain and snow from Texas to Mississippi. Widespread snow fell across much of East Texas and northern Louisiana, with totals generally ranging from 2 to 5 inches, with isolated higher amounts near 6 inches across portions of deep East Texas and west-central Louisiana.

As a result, one-category improvements were made across much of the state. The rain and snow even helped chip away at the extreme (D3) and exceptional (D4) areas in the western part of the state as soil moisture and groundwater began to improve.

Drought conditions deteriorated in far South Texas, which has experienced warmer than normal temperatures, combined with rainfall less than 25 percent of normal over the last 90 days. To the east, rain and snow helped improve parts of the abnormally dry areas in southwest Arkansas and central Mississippi. — UNL Drought Monitor