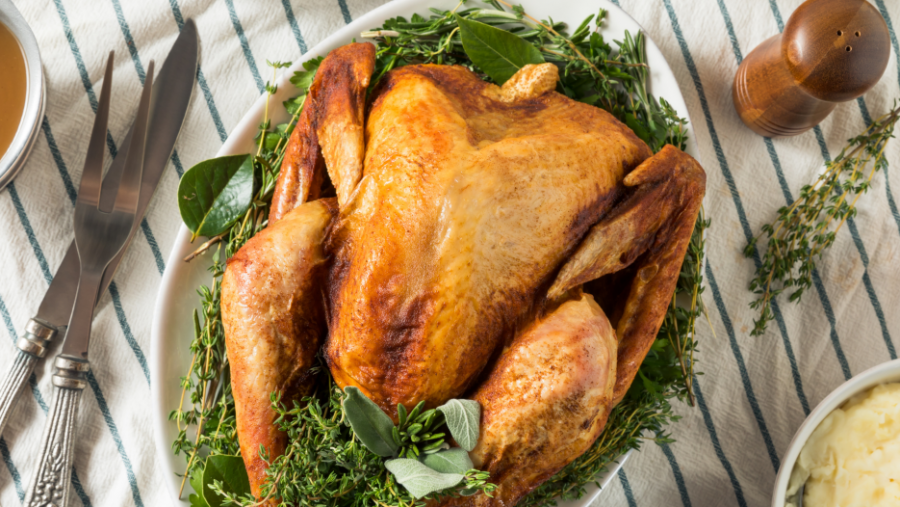 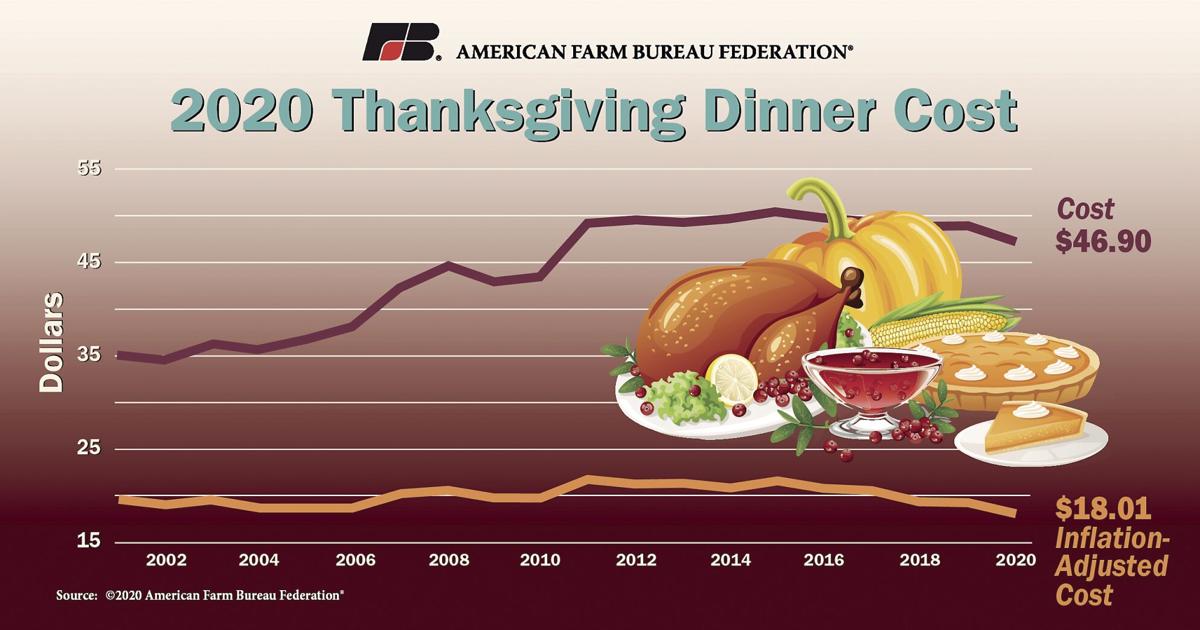 Farm Bureau’s 35th annual survey indicates the average cost of this year’s Thanksgiving feast for 10 remains affordable at $46.90 or less than $5 per person.

Thanksgiving celebrations will look different for many Americans this year due to the COVID-19 pandemic. Gatherings are likely to be fewer and farther between, with social distancing and perhaps even remote family get-togethers. One tradition that continues this year is the American Farm Bureau Federation’s (AFBF) annual cost survey of classic items found on the Thanksgiving Day dinner table.

Farm Bureau’s 35th annual survey indicates the average cost of this year’s Thanksgiving feast for 10 remains affordable at $46.90 or less than $5 per person. This is a $2.01 decrease from last year’s average of $48.91.

“The average cost of this year’s Thanksgiving dinner is the lowest since 2010,” said AFBF Chief Economist Dr. John Newton. “Pricing whole turkeys as ‘loss leaders’ to entice shoppers and move product is a strategy we’re seeing retailers use that’s increasingly common the closer we get to the holiday,” he explained.

The centerpiece on most Thanksgiving tables—the turkey—costs less than last year, at $19.39 for a 16-pound bird. That’s roughly $1.21 per pound, down 7 percent from last year. The survey results show that retail turkey prices are the lowest since 2010.

The shopping list for Farm Bureau’s informal survey includes turkey, stuffing, sweet potatoes, rolls with butter, peas, cranberries, a veggie tray, pumpkin pie with whipped cream, and coffee and milk, all in quantities sufficient to serve a family of 10 with plenty for leftovers.

In addition to turkey, foods that showed slight price declines include whipping cream and sweet potatoes. Foods showing modest increases this year included dinner rolls, cubed bread stuffing and pumpkin pie mix. After adjusting for inflation, the cost of this year’s Thanksgiving dinner is $18.01, down slightly from last year.

In recognition of changes in Thanksgiving dinner traditions, the Farm Bureau price survey also includes ham, potatoes and frozen green beans. Adding these foods to the classic Thanksgiving menu increased the overall cost by $13.21, to $60.11. This updated basket of foods also declined slightly in price (4 percent) compared to 2019.

Although it’s difficult to predict if panic purchasing will again become a concern due to the pandemic, “Turkeys—and other staples of the traditional Thanksgiving meal—are currently in ample supply at grocery stores in most areas of the country,” Newton said.

Farmers’ perseverance in continuing to produce food throughout the pandemic despite the challenges of volatile markets has been recognized by the public, according to recent AFBF public opinion research. Nearly nine in 10 adults (88 percent) trust farmers, a 4 percent increase from AFBF’s June 2020 polling. Further, the #StillFarming campaign tells the stories of farmers and ranchers still hard at work during the pandemic—and the challenges they are overcoming to feed America and the world.

This year’s national average cost was calculated using more than 230 surveys completed with pricing data from all 50 states. Farm Bureau volunteer shoppers were encouraged to check prices online using grocery store apps and websites due to the pandemic. They looked for the best possible prices without taking advantage of special promotional coupons or purchase deals.

The AFBF Thanksgiving dinner survey was first conducted in 1986. The informal survey provides a record of comparative holiday meal costs over the years. Farm Bureau’s classic survey menu has remained unchanged since 1986 to allow for consistent price comparisons. — AFBF

Markets trade sideways ahead of Thanksgiving

Cattle markets traded mostly sideways last week, and then lost some ground on Thursday. With COVID-19 cases on an upward trend and Thanksgiving looming around the corner, there has been a lot of uncertainty everywhere.