Sign Up
Log In
Purchase a Subscription
You are the owner of this article.
Edit Article Add New Article
You have permission to edit this article.
Edit
Welcome, Guest
This Week's Paper    |    Markets
News
Publications
Markets
Classifieds
Sale Reports
Community & Events
Livestock Tours
Contact Us
Subscribe Now
Share This
1 of 2 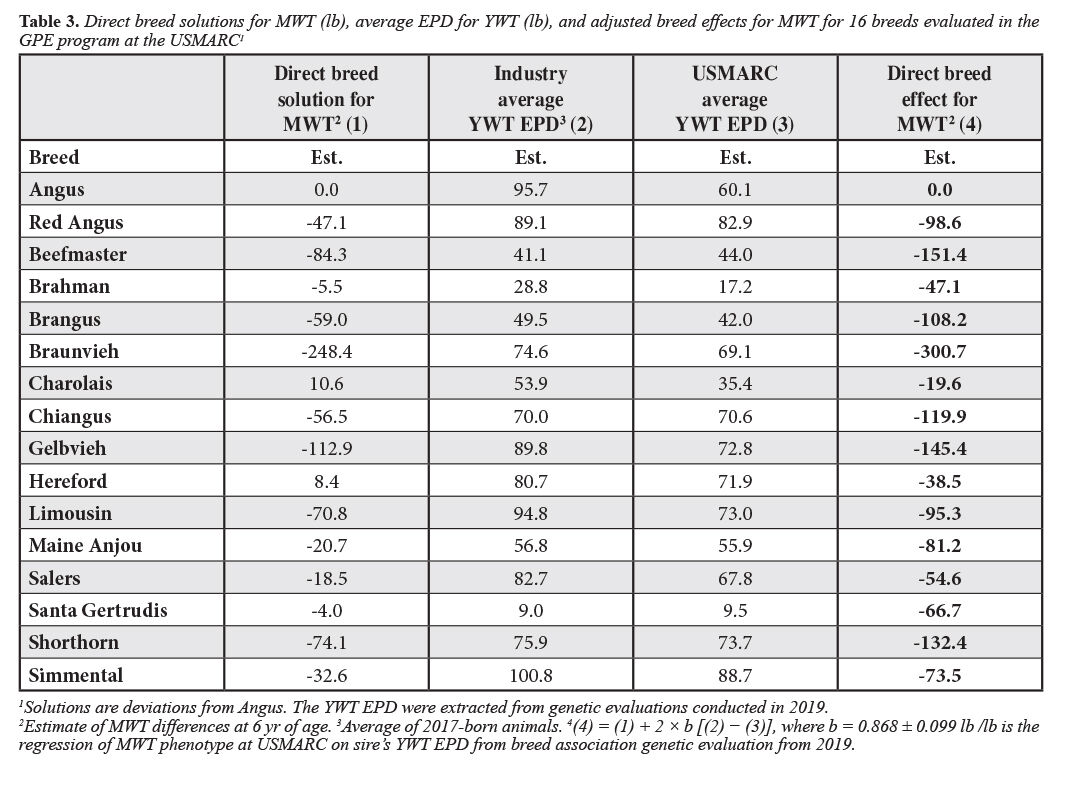 In a recent issue of the Journal of Animal Science, the scientists at the University of Nebraska and U.S. Meat Animal Research Center (USMARC) published their findings on the mature weight differences of the 16 breeds in the current USMARC Germplasm Evaluation Program.

The article, “Breed and heterotic effects for mature weight in beef cattle,” is found in Volume 99, Issue 7 of the July 2021 Journal of Animal Science.

As usual, the results of their analysis demonstrate breed differences—although in this case, a single trait—which help producers design breeding programs that account for and take advantage of these breed differences and complementarity.

The USMARC, part of USDA’s Agricultural Research Service, is located in Clay Center, NE, on what was a 34,000-acre decommissioned U.S. Navy munitions depot. Starting with the 1970 calf crop, the Germplasm Evaluation Program has been our country’s—and for that matter, the world’s—most comprehensive comparison characterizing breeds for various biological properties.

Whereas in the early years the Germplasm Evaluation Program was run in cycles, they have recently gone to a continuous approach of studying our country’s most economically important breeds. This has presented some unique statistical challenges, one of which is accounting for sampling bias in the sires they use. In this case, they adjusted for selection bias using the sire’s yearling weight EPDs compared to the average of the various breeds’ industry population.

In terms of the data used in the mature weight comparisons, the study involved 5,156 cows with 108,957 weight records collected throughout the animals’ lifetime, up to 6 years of age. Most cows had three records per year, which included the third trimester prior to calving, prior to breeding and when palpated for pregnancy.

A number of statistical models were fit to determine what best explained the breed differences found within the cows in the germplasm study, which had varying breed percentages and repeated weight measures taken over their lifespans.

This alone resulted in a stand-alone peer reviewed journal article comparing these statistical methodologies: “Comparison of different functions to describe growth from weaning to maturity in crossbred beef cattle.” The article can be found in Volume 97, Issue 4 of the April 2019 Journal of Animal Science.

The average weight of the age-adjusted cows was 1,430 pounds, and the direct heterosis was determined to be 2.4 percent. We generally look at heterosis as a “free lunch,” and in most cases it is, but heterotic effects like increased mature weight and increased milk come at a cost that needs to be considered. The authors’ estimate of heritability of mature weight from these data was 0.56, indicating this is a trait that will respond rapidly to selection.

When viewing the results found in Table 3, Angus, representing the country’s most populous breed, is used as the base upon which other breeds are deviated. This is usual with USMARC germplasm reports.

Column 1 in the table represents the direct mature weight breed solutions, which demonstrates considerable breed variation. For example, Charolais is slightly heavier at 10.6 lbs., compared to Braunvieh at the other extreme at -248.4 lbs.

The direct breed effect estimates seen in column 1 were then adjusted to account for the sire sampling utilizing yearling weight EPDs. Yearling weight genetic predictions were chosen because they are based on a commonly reported weight trait most closely associated with mature weight.

Any sire sampling bias was accounted for through regression analysis, which included the average of each breed’s 2017 calf crop’s yearling weight EPD (column 2) and the weighted average of the sires’ yearling weight EPDs (column 3) used to produce the USMARC population from which the data was collected. This methodology would also account for bias based on when sires were sampled and the genetic trend differences between breeds.

For example, little difference would be expected in sires sampled over time from a breed with a flat genetic trend. However, because Angus exhibited a particularly steep genetic trend, it resulted in the higher magnitude difference in the averages seen in columns 2 and 3. These breed differences made the researchers’ decision to adjust for sampling bias appropriate and necessary for the mature weight comparisons to be valid.

When this adjustment is made (column 4), the breed differences are magnified. Angus are clearly the heaviest cows in this population, with the next closest breeds being Charolais and Hereford at -19.6 and -38.5 pounds, respectively. Others examples of high-use breeds were Red Angus (-98.6 lbs.), Gelbvieh (-145.4 lbs.), Limousin (-95.3 lbs.), Shorthorn (-132.4) and Simmental (-73.5 lbs.). The most extreme breed difference seen was Braunvieh at -300.7 pounds lower than Angus.

There are considerable differences between the breeds as represented in their deviations that could be exploited in a breeding program. When viewed alone, mature weight represents a cost to an operation in the form of maintenance requirements, and to a lesser extent, potential revenue in the form of salvage value. However, no single trait should ever be considered in a vacuum.

When evaluating breeding decisions—beyond these mature weight estimates—the corresponding revenue potential for things such as the genetic potential for growth and carcass weight must be considered, as well as the ability of an animal to express this potential based on the environment in which it will be asked to perform.

Ultimately, all breeders’ operations are unique systems, and every producer, whether they are separated by region of the country or just a strand of barbed wire, must operate within their unique matrix of environment, feed resources, management and market. There is no overarching ideal breed or animal, and mature cow size is not a proxy for efficiency, as biologically efficient and inefficient cows come in all sizes.

Therefore, the USMARC scientists, aided by researchers at the University of Nebraska, continue to provide our industry with the great service of the Germplasm Evaluation Program. These across-breed comparisons are necessary to build across-breed EPDs, indexes and decision support software, which will allow producers to make better breeding decisions with each passing year. — Dr. Bob Hough, WLJ correspondent

Markets at the beginning of the week were mostly influenced by the news that a fire at the JBS plant in Grand Island, NE, was going to halt production. Fortunately, slaughter and fabrication operations ceased for just one day. However, before production resumed, futures dropped for both live and feeder cattle.