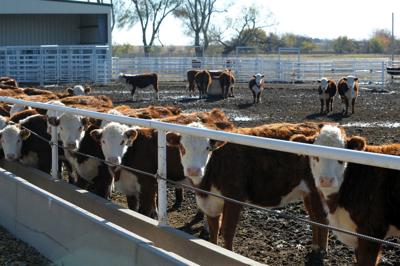 Cattle markets were slow to develop last week. Many traders have pointed to uncertainty about the coronavirus and not really knowing what to do. And we’re in a typical seasonal low. But the coronavirus would only have an effect on export markets, or just some reason to take pause and evaluate the fundamentals of the cattle business.

One CME market commenter said that the China trade deal is to kick in soon, especially for pork producers, and was expecting a large rise in pork prices, which should give a boost to beef values as well.

There was a little cash trade at the closing. According to Mandatory Price Reporting last Thursday, 36,118 head had been confirmed traded, live trade averaged $118.94 and $190.50 dressed for the week. Winter weather in much of feeding country may discourage buyers because cattle would be carrying too much mud. And packers appear to have plenty of contract and formula cattle around them.

Slaughter levels are declining. Last week’s slaughter was at 637,000 head but we’re running about 5,000 head behind last year’s pace. Beef production is just three-tenths of a percent higher than a year ago.

Carcass weights have been getting larger. Cattle feeders have enjoyed a mild winter and cattle performance has been excellent. Average weight for fed steers was 948 pounds last week and 848 pounds on fed heifers. These weights don’t suggest that feeders are terribly current on marketings.

As far as the futures market is concerned, Cassie Fish at Consolidated Beef Producers said, “The massive and dramatic open interest purge in live cattle futures—16.8 percent of the total, 67,468 contracts in 14 days—was a harsh reminder as to the precarious nature of the negotiated fed cattle trade.

“The catalyst for the initial break may have been the coronavirus, but while other markets found their footing, cattle did not, weighed down by get-me-out selling, unrelated to immediate fundamentals.

“There were not more cattle that suddenly appeared, no overnight worsening of beef demand. Just two weeks of massive selling, led by managed funds, after three months of price consolidation,” Fish commented.

“What the futures break exposed is how little leverage cattle feeders have when negotiating with packers and how much psychology influences price discovery in 2020 rather than simply supply and demand. What is the latest headline?”

Cattle and beef trade: a look back and a look ahead