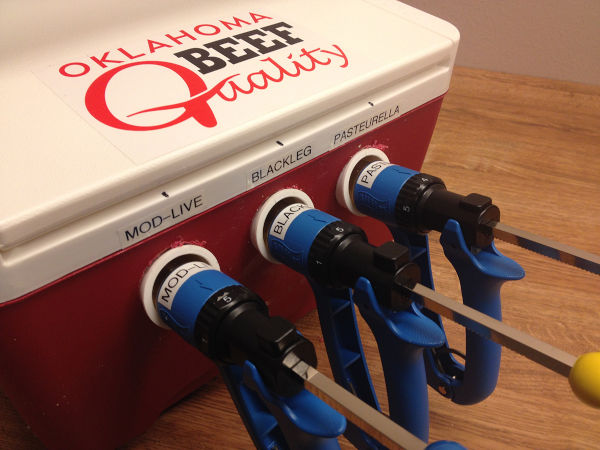 Coolers can be easily modified for syringes and are important in maintaining vaccine efficiency when chute-side working cattle.

From miscarriages in cow herds to respiratory disease and poor production in stocker calves, bovine viral diarrhea (BVD) wears many masks. Here’s exactly what BVD can do when you’re raising cattle.

The BVD virus can infect a variety of ruminant species, including cattle, sheep, goats, bison, llamas, alpacas and white-tailed deer. Pigs have also been shown to contract the virus. The virus is transmitted primarily through nose-to-nose contact and reproductively. The most important aspect of virus transmission is dam to calf during pregnancy. The effect on the pregnancy and the calf depends on when it is exposed during gestation.

In the accompanying chart, the days of gestation are listed along the bottom row, while the potential results of infection are listed in the left column. The black boxes indicate the time of BVD infection during gestation when the potential losses may occur. Up through about six months of gestation, the heifer or cow may fail to conceive early or may miscarry later. As the calf is forming, the virus may cause malformations, which can result in a miscarriage or an abnormal calf.

While the idea of miscarriage and abnormal calves seems devastating, there is a more economically significant phenomenon that can happen to the calf infected during pregnancy. An infection between 45 to 125 days of gestation can result in a persistent infection state. During this time, the calf’s immune system is not quite up and running, so he is unable to recognize the virus as any different from himself.

Therefore, it remains for the rest of his life. These calves may become ill shortly after birth, but some will appear perfectly healthy and live for many months. And therein lies the problem. These calves shed the virus through nasal secretions and manure, exposing every animal around them throughout their lives.

Infection of calves and adults with this virus can cause diarrhea, as the name implies, but it also causes pneumonia, lack of appetite and ulcers in the mouth. In addition, the virus reduces the animal’s number of immune cells and impedes cell function. So, in addition to the problems the virus directly causes, this suppression of the immune system can predispose the animal to all sorts of other disease syndromes, including the bacterial causes of pneumonia, which is what we have recently seen causing fatal disease in BVD-infected herds.

When there are unexplained illnesses in a herd, including calves born with abnormalities, miscarriages, low pregnancy rate or a high number of illnesses and deaths due to pneumonia, always think of BVD. One herd recently had lost 45 percent of their calf crop due to death from pneumonia. Because they calve year-round, we don’t know how many calves were lost due to poor pregnancy rates or miscarriages.

This is economically crippling and almost always stems from the presence of one or more persistently-infected calves, either on the affected place or across the fence at a neighboring place. Because persistently infected calves can appear completely normal, laboratory testing must be performed to determine who is the “typhoid Mary.”

In this situation, testing all calves and all animals who don’t have a calf to represent them, including bulls, replacement heifers and open cows, is the most economical approach. Cows that are pregnant at the time of herd testing should be isolated from the herd (to protect the calf until current persistently-infected animals are identified) and then the calf should be tested immediately upon birth.

Several tests can be used to diagnose BVD, but both of my preferred tests use an easy sample: an ear notch. It used to be that ear notch testing had to be performed on tissue in formalin (formaldehyde), but this is no longer the case—a dry piece in a sandwich bag kept cold or a piece in sterile saline is sufficient.

Finally, here are some ways you can protect your herd from BVD:

• Vaccinate heifers and cows against BVD pre-breeding, following the label on the vaccine you select. Bulls need annual protection, too;

• Test animals that may be sentinels of the disease—sick calves, dead animals, miscarried fetuses;

• Maintain a breeding season. If the bulls are out all the time, it is impossible to know which cows are supposed to be bred when and, therefore, you can’t know if pregnancy rates are lower than they should be; and

• Quarantine all incoming animals for at least three weeks and test them. This includes your own cattle that have left the place and are returning. You have no idea what they met up with while they were gone.

It’s worth having a conversation with your veterinarian about your herd’s risk for BVD. Major risk factors for BVD in the cow-calf situation are movement of cattle in and out, having neighbors moving cattle in and out, and having stocker calves around, even across the fence. It only takes one animal with BVD to hijack many years’ worth of investment in a herd and some basic planning can go a long way to making sure that animal never shows up. —Meredyth Jones, Oklahoma State University College of Veterinary Medicine associate professor

Herd immunity is an important concept

The term “herd immunity” has come into common usage in recent months. The concept of herd immunity is a companion concept to individual immunity.