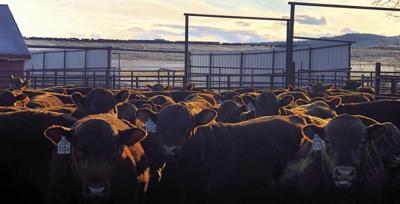 The industry is moving into the thick of bull season with auctions and private treaty sales occurring every day. Since there are a great many options available to commercial producers in terms of sourcing herd sires, it is important they have a carefully thought through game plan. This includes the scenario the bulls need to work within, choosing a seedstock supplier, evaluating objective data, evaluating an animal’s phenotype, and developing a budget.

A seedstock bull’s purpose is to transmit genetic value into your herd, and it is important these genetics be custom fit to a commercial producer’s unique situation. This includes the combination of environment, management, feed resources, and market; this is different for every operation—even those that share a fence line.

Other questions will also need to be answered.

Will new herd sires be expected to breed heifers, cows, or a combination of the two? This will determine calving ease needs.

Another question is whether the producer will be marketing all their heifers as feeders, keeping a small number as replacements, or developing a large portion of the heifer calf crop as replacements for sale to other commercial producers. This will determine the emphasis that needs to be placed on maternal traits.

The environment and feed resources on a ranch will determine the amount of output potential needed in a bull’s genetics. It will regulate the amount of milk and weaning weight that can be expressed, so buying bulls with more genetic potential than the environment will sustain is a waste of money and can be counterproductive.

Another major consideration is how they are going to be marketed. Every operation should be striving to produce reputation feeder cattle that will be profitable not only for the commercial producer selling them, but also the segments of the industry downstream. Some ignore carcass traits as they feel they don’t get paid for them. People would be surprised just how much information feeders have about a producer’s calves in terms of health, feedlot efficiency, and how they grid. The only cattle that truly lose their identity are light calves sold in small groups that will be comingled and grown in backgrounding and stocker operations.

With the hard job done of creating a “job description” for bulls that will fit a producer’s scenario, the next job is to choose a seedstock supplier. It is important that the seedstock operation has similar goals in terms of designing bulls as their potential customers. The earned reputation of the seedstock supplier should also be weighed heavily. It is also wise to have at least two potential seedstock suppliers—more if you are crossbreeding—to assure needs are met.

The size of a commercial producer’s operation has an impact on what herds they should consider as a supplier. Large operations that are buying bulls in quantity should gravitate to the larger sales, which will have enough selection to fill their needs. However, if a producer just needs a small number of bulls, they should not discount small breeders in their vicinity. A producer can often get some top bulls at reasonable prices from small breeders. With all that said, with auctions on the internet and free delivery options offered by some operations, it puts a seedstock producer’s bulls within reach of everyone in the country.

Based on a producer’s scenario that determines which system the bulls are going to be used in, EPD and index thresholds should be determined. The bulls that don’t meet these criteria should be eliminated from consideration prior to the sale. It is important to stay disciplined on this and avoid impulse buying, which can be easy to do, particularly at an auction.

The objective criteria desired for each bull should have both lower, and for some traits, upper limits. For instance, calving ease is desired by the majority of producers, but it should be an appropriate level for both heifers and cows. It has been shown that beyond a certain level of calving ease EPDs, there is no additional benefit. Although no one wants to pull calves in their mature cow herd, there is also no need for them to have 60-pound calves. Calves too small may have problems with vigor and survivability, so having too much calving ease can actually be a detriment.

Other traits like milk, growth, mature weight, etc., all have a window of predicted performance that is optimal for each person’s situation. If a producer overshoots these performance traits, it will result in a cow herd too big for their environment and have less-than-desired reproduction.

When looking for bulls that have optimum levels of predicted performance, a producer must stay disciplined. This is particularly true because producers have been conditioned by experts to seek out the outliers for their herds. These outliers sometimes can lead a producer’s herd down a path they shouldn’t be going down.

To market premium feeder cattle, they need to look the part in terms of rib, bone, muscle and structure. This is because feeders often buy calves for the first time based on their preconceived notion of what good feeding cattle should look like. However, what will actually determine the profitability of the calves, and whether they will become reputation feeder cattle with repeat buyers, will not be their looks, but their health and genetics to perform in the yard and on the grid.

What people pay for bulls varies from year to year, so it is good to keep up on the market in sources like WLJ. If the opportunity arises, watching bull sales on the internet is another way to keep up. The important thing is to go to the sale with enough money to come home with the bulls you need and want.

It is also important to remember there is nothing more expensive than a bad bull—a bull that will take your cow herd in the wrong direction, a bull that keeps you up all night pulling its calves, a bull that won’t produce the payweight your environment will support, a bull whose progeny are not profitable for multiple segments of our industry.

Therefore, pay within what is reasonable, and bring home the type of bulls that will make you money. Be sure to do your homework prior to the sale to assure you are getting what you need. — Dr. Bob Hough, WLJ correspondent

Do you possess the characteristics of an intentional beef producer?

Intentional beef producers share many characteristics when it comes to managing their operations for healthy herds and profits.