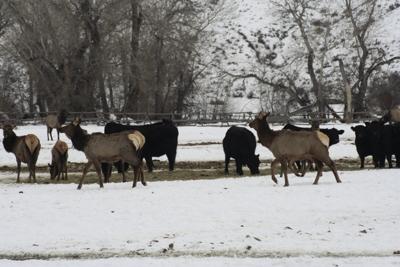 Brucellosis is a zoonotic disease, which means it can affect many species of animals, including humans. Often called Bang’s disease—Dr. Bernard Bang, a Danish veterinarian, isolated the bacterium in 1897—this worldwide disease affected up to 25 percent of U.S. cattle until heifer vaccination and control programs were implemented, and all female cattle were tested, with those testing positive slaughtered.

Brucellosis is no longer much of a concern except in Wyoming, Idaho and Montana—the three states surrounding Yellowstone Park in the Greater Yellowstone Area (GYA).

Even after 60 years of control efforts, this disease is still a problem in the GYA, since brucellosis exists in elk and bison in Yellowstone Park. These animals often come out of the park and expose cattle. Infection is spread mainly through contact with aborted fetuses and discharges from infected females.

Dr. Debra Lawrence, Idaho State Department of Agriculture veterinary medical officer, says that vaccination mainly prevents abortions, minimizing spread, but does not keep a cow from becoming infected. “We try to keep elk out of cattle herds,” she said.

The three states surrounding the park all have designated surveillance areas (DSA), where brucellosis is known to exist in wildlife, and where there have been cases in cattle during the past dozen years or so. State regulations in these areas include cattle herd testing and vaccination, cattle identification, etc., to help prevent the disease. Elk in certain areas are also monitored and tested to determine the level of infection in elk herds.

Dr. Jim Logan, Wyoming state veterinarian, says all three states have had cases in cattle since 2002. “We’ve developed rules for livestock to help prevent the disease, but also assist in epidemiologic investigations for disease control if it should happen,” he said.

Wyoming went brucellosis-free in 1985. “We did not find another case until 1988, but we’ve had a few cattle test positive in recent years,” Logan said. “Montana has also had some positive test results, partly because the test we’d been using for 20 years was not available; Animal and Plant Health Inspection Service (APHIS) was no longer able to get the reagents, antigens and software support necessary for that particular screening test. So we started using a more sensitive test that picks up a lot of non-negatives—some of which will be actual cases of brucellosis and some (upon further evaluation) may not be,” he said.

This created more work for producers, regulatory veterinarians, and state veterinary laboratories. “If any brucellosis exists in cattle herds, we must find it quickly and deal with it,” Logan said. “State veterinarians work with APHIS on testing protocols and try to work with producers to minimize impacts of test results. It’s hard on producers when they hear they have a non-negative animal and will be under movement restrictions until it is sorted out.

“It becomes a marketability issue. If we can assure everyone that we’re clean, we have open marketability… But if that gets questioned it affects producers’ marketability,” Logan said.

Producers who plan to ship female cattle to states that still require vaccination must have them vaccinated before they can enter those states—unless they are going for feeding and slaughter. Several states do not allow cattle and domestic bison to be imported for breeding purposes if they did not receive vaccine between 4 and 12 months of age.

The vaccine is a live product and must be administered by a veterinarian or state or federal animal health official. At the time of vaccination, the animal receives an ear tag and tattoo, showing it is officially vaccinated with the RB51 vaccine, and the year.

Lawrence says producers in these states who are new to the cattle industry may not realize their female cattle must be vaccinated. “There are also some producers who don’t vaccinate. Folks in the DSA regions are fairly cautious, however, because they know the risks,” she said.

Many states don’t require cattle coming into their state to be vaccinated, but some require proof of vaccination, or tests, if cattle are coming from Idaho, Wyoming or Montana, especially if coming out of a DSA. “A diagnosis of brucellosis could have immediate negative impact on domestic or international trade,” Lawrence said.

Idaho requires intact adult cattle from the DSA be tested for brucellosis if they change ownership or leave the DSA—unless going to slaughter where they will be tested. These safeguards prevent infected cattle from leaving the DSA.

“We don’t have county-to-county brand inspections, but require DSA producers to call us for a permit to move,” Lawrence said. “Most of the animals that leave the DSA are cull cows going to livestock markets. They get bled for testing at those markets, and those that go to slaughter are bled again at the plant,” she said.

Dr. Keith Roehr, Colorado state veterinarian, says his state no longer requires vaccination. “We did for dairy cattle until a few years ago, but ceased that requirement too, because of the reduced risks of disease,” he said.

“A resolution from the National Assembly of State Animal Health Officials considered dropping vaccination requirements for cattle moving to other states. Since vaccination is required for imported cattle, one of the main reasons producers vaccinate heifers is for cattle movement; it doesn’t have much do with preventing infection outside the GYA,” said Roehr.

The new resolution was for state animal health officials to take to their livestock producer associations and advocate for dropping the vaccine requirements. “In areas of wildlife exposure, however, there is still good reason for cattle imported into those areas to be vaccinated—and at least two states in GYA allow for adult vaccination upon arrival,” he said.

“In future, if states reassess the need for requiring brucellosis vaccine for import (and adult vaccination if needed), perhaps we can better invest producers’ dollars in other areas of animal ID rather than continuing vaccine requirements that may be antiquated,” Roehr said.

If cattle do need to be vaccinated, calfhood vaccination is always preferred over vaccinating adult cattle. “Permitting adult vaccination purely for meeting import requirements does not make sense. If you want to assure ease of movement, it’s best to vaccinate when they are heifers,” he said.

Idaho has had an increase in adult vaccinations lately. “At this time (according to our rules) we cannot vaccinate adult out-of-state cattle upon arrival,” Lawrence said. “They must be vaccinated before they come into the state. We’re proposing a rule change to remove that restriction. It’s been an issue, especially with Canadian breeding cattle coming in, because Canada doesn’t test for brucellosis or vaccinate for it,” she said.

“The only brucellosis cases in cattle in Idaho in recent years have all been traced to elk exposure. We’ve not had any cattle-to-cattle cases,” Lawrence said. “The last infected cow was in a herd of 500 and she was the only one that tested positive. To be considered free of brucellosis and get out of quarantine, there must be three negative whole-herd tests, and we never found another positive animal in that herd. It was just the one cow, which implies it came from wildlife,” she said.

There’s no effective way at this point to eliminate the disease in elk and bison. “One USDA researcher has worked with elk for 40 years to create a vaccine for elk in powder form, to be sprinkled on hay. However, the Centers for Disease Control and Prevention has now identified brucellosis as an agent that could be used as a weapon of mass destruction—and regulates any kind of research on brucellosis. The USDA research has been halted,” she said.

The U.S. has been declared free of brucellosis for international export purposes, except for the GYA states. “Brucellosis here will continue to be a challenge unless advances are made in research,” Lawrence said. — Heather Smith Thomas, WLJ correspondent

Dr. Matthew Cronin sets the facts straight about Yellowstone bison and why they shouldn’t be on the Endangered Species List.